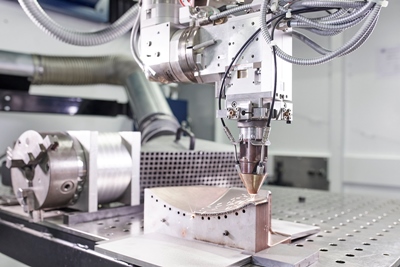 Germany-headquartered laser and machining systems company Trumpf is using this week’s Paris Air Show at Le Bourget to showcase the potential of laser additive manufacturing in the aircraft and satellite sectors.

It says that the techniques have shown the ability to halve the weight of satellite mounting structures, and cut the cost of so-called “rake” components used inside jet engines by three-quarters.

The LMD approach is also said to have advantages over conventional methods for engine blade repair, by delivering exactly the laser energy required to each part of the blade, as required.

Key market for additive
Thomas Fehn, general manager of Trumpf’s additive manufacturing business, pointed out in a company release: “With a market share of over 20 percent, the aerospace sector is one of the world’s most important industrial users of additive manufacturing. We are steadily expanding our market share and helping to establish the process as a key technology.”

One of the most obvious advantages of the additive approach is that it can reduce the weight of aerospace parts – particularly significant when it comes to launching satellites, but of growing importance in air travel, as aircraft manufacturers strive to improve environmental credentials and reduce fuel consumption.

“Additive technologies are the perfect match for the aerospace industry because they enable engineers to create parts that are both lightweight and robust,” states Trumpf, pointing out that additive techniques are particularly adept at handling light metals such as aluminum and titanium, which are typically more difficult to cut and weld than steel.

The LMF technique, carried out entirely within the confines of an additive system, uses a laser to build up parts layer by layer from a powder bed. According to Trumpf the technology is particularly suitable for creating complex parts used inside engines, combustion chambers, and specialist aerospace components.

“In contrast, LMD uses a laser beam to build up layers on the surface of a part, with the metal powder being injected through a nozzle,” explains the firm. “LMD can also be used to rapidly generate very large parts. Typical applications include prototype development and repairs to large parts such as gas turbines and compressor blades.”

Space hardware
Trumpf cites the example of its “TruPrint 3000” LMF machine – based around one of its own 500 W power 1070 nm fiber lasers – in satellites. Working with partner Tesat-Spaceroom, it has produced a mounting structure for a project that will test the space-ruggedness of new communications technologies.

In collaboration with the company AMendate, Trumpf says its engineers optimized the shape of the mounting structure for a microwave filter on the Heinrich Hertz Satellite mission, reducing its weight by 55 percent. The mount now weighs only 75 g, compared with the previous 164 g.

As for aircraft engines, Trumpf has been working with the Spanish company Ramem on production of new rake structures. Manufacturers use these parts during engine development to measure the pressure and temperature of the engine, an important part of testing aircraft performance.

Trumpf says that its TruPrint 1000 – a more compact version of the 3000, based around a 200 W fiber laser – has produced an optimized rake geometry, reducing the amount of material needed by some 80 per cent, and its cost by a similar amount.

Project manager Julia Moll, a member of Trumpf’s additive manufacturing team, said: “This result shows that 3D printing can save a significant amount of time, material and money in the aircraft industry.”

LMD for blade repair
In terms of LMD applications, Trumpf has chosen to highlight the possibilities in jet engine blade repair, describing the technique as “perfect” for the job.

“In some sections of the blades, the material is just 0.2 mm thick,” explains the Ditzingen firm. “Conventional methods quickly reach their limits in these kinds of applications. With LMD technology, however, the laser can be positioned with an accuracy of approximately one hundredth of a millimeter before it applies a precisely calculated dose of energy.”

At the same time, the system feeds in material of exactly the same composition as the part itself - a process typically taking just a few minutes. In principle, that makes blade repair much easier, and means that blades can be repaired multiple times - significantly reducing the cost of such critical parts.

The low dose of energy needed is said to be a key advantage, while the ability to both repair and coat parts, and to build up three-dimensional structures, is simply not possible with conventional welding methods.

Examples of Trumpf’s LMD equipment include its “TruLaser Cell” series of machines, which can be equipped with fiber-guided lasers delivering multi-kilowatt powers.