Overall sales up but photonics segment down amid weak macroeconomic environment and microelectronics slowdown. 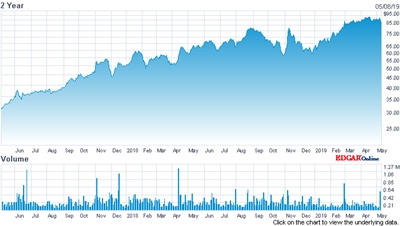 Nasdaq-listed Novanta has reported a year-on-year decline in sales for its photonics business unit, as it deals with sluggish industrial markets and a temporary slowdown in demand for lasers used in DNA sequencing equipment.

The Bedford, Massachusetts, company, which owns beam-steering specialist Cambridge Technology and laser providers Synrad and Laser Quantum, posted revenues of $157.2 million in its opening quarter of 2019, up 7 per cent on last year.

But that total masked a decline within its photonics unit, where sales slipped to $59.2 million, down from $61.8 million a year ago.

Strong demand in the medical sector helped offset that decline, however, helping Novanta’s “vision” business record a 17 per cent boost in sales, to $65.9 million.

Microelectronics weakness
Amid what he called an uncertain macroeconomic and capital spending environment, company CEO Matthijs Glastra declared himself pleased with the overall performance but forecast a slight sequential dip in sales during the current quarter.

That appeared to play badly with the financial markets, sending Novanta’s stock down 9 per cent on a trading day that was already marred by fears of an escalating trade war between the US and China.

In a call with investors to discuss the latest results, Glastra said that the microelectronics market was particularly weak, with Novanta’s sales into that sector down 20 per cent year-on-year.

However, microelectronics represents only around 10 per cent of the company’s business, helping to mitigate that negative momentum. While the medical sector remains strong, and Novanta’s executive team remains excited about the potential in new areas like robotic surgery and DNA sequencing, demand for lasers used by the latter has slackened compared with the same time last year.

But Glastra said that was largely due to the particularly strong order flow experienced last year, telling investors that the current “lumpiness” in demand reflected “temporary customer launch dynamics” rather than any slowdown in the wider market.

He added: “In fact, we couldn't feel more excited about the long-term growth prospects of this business as DNA sequencing is still in the early stages of penetration into clinical applications, with numerous positive catalysts on the horizon.”

Laser Quantum’s sales have also been impacted by the wider industrial market slowdown, however, as have those of the carbon dioxide laser specialist Synrad.

Uncertainty spreads
Summarizing the current situation, Glastra said that Novanta’s broad diversification would position it well for the remainder of this year and beyond, with the current industrial weakness continuing to be balanced out by demand from the medical sector.

“We see a long-term need for our motion, vision and photonics capabilities in a large variety of applications on the back of macro trends of Industry 4.0, precision medicine and healthcare productivity,” he added.

At around one-tenth of sales, the company’s exposure to China is relatively modest, but the CEO is still expecting to see some impact from the current trade uncertainty. Glastra said that although this uncertainty was now spreading to the rest of Asia and Europe, it was not evident across all sectors, with “good market momentum” in laser additive manufacturing.

• Despite slipping 9 per cent immediately following the latest results announcement, Novanta’s stock price has risen in value strongly since the start of the year. Trading at just over $85 on May 8, it remains close to long-term highs, and is up around 33 per cent since January 2.