MOONRISE project to take 3D-printing to the moon to build “village” and for space exlporation. 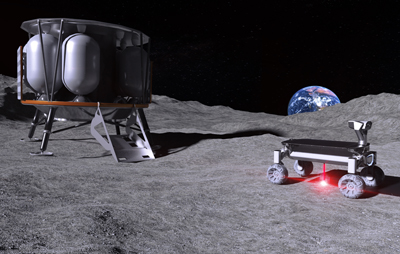 Melting moondust: How MOONRISE technology could work on the moon.

The moon is of great importance as a research station and starting point for further space expeditions. However, the cost of flights and transports to the moon are enormous – a kilogram of loading capacity costs approximately €700,000, says Laser Zentrum Hannover, Germany, which is a partner in a lunar laser R&D program, called MOONRISE.

Therefore, LZH contends, infrastructure, components and devices would at best be manufactured directly on the Earth's satellite. But using what materials?

This is where the MOONRISE technology comes in: "We want to take a laser system to the moon, designed to melt moon dust, the so-called regolith. We would thus take the first step to take additive manufacturing to the moon," said Niklas Gerdes from LZH.

In this way, scientists from Braunschweig’s Institute of Space Systems (IRAS) and LZH want to prove the following: a laser system that weighs no more than 3kg and has the volume of a large juice package could melt down local raw materials on the moon and convert them into versatile structures subsequently.

The opportunity to fly their MOONRISE technology to the moon in 2021 with the first moon mission of the Berlin-based New-Space company PTScientists offers the researchers from Lower Saxony the opportunity to test their pioneering technology under real conditions.

Stefan Linke from IRAS commented, "The planned direct proof, that we are able to process lunar regolith with already available hardware components is crucial for the planning of future missions. Thus, larger and more sustainable projects on the surface of our cosmic neighbor are becoming possible."

A fall of moon dust

Specifically, the scientists from Braunschweig and Hanover want to melt regolith (moon dust) on the lunar surface in a controlled manner using their laser system. After cooling, it forms a solid form that would be suitable, for example, as a building material for a future "Moon Village" – an outpost in space.

The targeted melting of regolith into predefined structures is to be monitored and observeded using high-resolution cameras. The findings from these experiments are expected to have a fundamental impact on exploratory missions in general.

The team comments that If the experiment succeeds on the moon, then the MOONRISE process can be scaled up to produce larger structures. Thus, in the long term, whole infrastructures such as foundations, paths, and landing surfaces could be built using the MOONRISE manufacturing technology.

Project MOONRISE has been running for almost nine months. The team says results from early tests are promising: The laboratory setup is adapted; suitable, common laser hardware identified and tested, the optics designed and tested [specifics such as brands, powers and wavelengths have not yet been revealed].

Currently, the team is working on adapting the laser to the load compartment of the lunar vehicle, the so-called rover. The laser is integrated into a tunnel at the bottom of the rover. After the adjustments, the entire system is tested for its space suitability: because on the way to the moon, the laser system must withstand shocks and massive temperature differences.

The project has already scheduled a “big day” in the calendar – in 2021: The MOONRISE laser of LZH and IRAS will be part of the moon mission of the PTScientists, to be launched to Earth’s satellite, and integrated into the “moon rover”. The ambitious and future-oriented research project is funded by the Volkswagen Foundation within the scope of its Off the Beaten Track program.

The MOONRISE project will provide the scientific and technical basis for 3D printing on the moon. "With the newly opened research center at Hannover Institute of Technology and the so-called "Einstein Elevator", we have the necessary infrastructure at our disposal in the metropolitan region of Hannover-Braunschweig to carry out top space research," said Prof. Ludger Overmeyer from LZH.