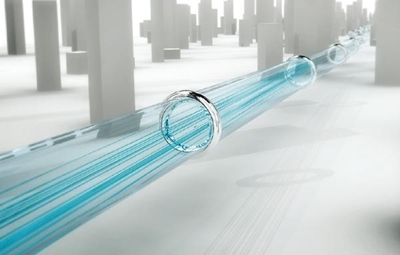 The team, from Peking University and Beijing University of Posts and Telecommunications, say that they used a version of the encryption technology known as “continuous-variable” (CV) QKD, which uses standard fiber components, rather than specialist single-photon sources.

The main advantage of the approach is that the quantum keys can be distributed quickly, with no need for cooling of high-spec components. While the technique has been demonstrated in both the laboratory and deployed fiber networks before, this latest experiment is said to extend transmission distance and key distribution rates to new highs.

Faster key rates
The research team carried out two field tests of CV-QKD, in the Chinese cities of Xi’an and Guangzhou, achieving transmission distances of around 30 km and 50 km with acceptable losses. 50 km is more than twice the distance of the previous best demonstration over a commercial fiber link.

“We achieve secure key rates two orders of magnitude higher than previous field test demonstrations, by employing an efficient calibration model with one-time evaluation,” wrote Hong Guo and colleagues in their paper, published in the journal Quantum Science and Technology.

“Our results pave the way for the deployment of continuous-variable QKD in metropolitan settings.”

Guo describes the result as a “significant step” towards bringing quantum encryption into everyday use. “It has pushed CV-QKD towards a more practical setting, and, naturally, one may expect that a ‘quantum-guaranteed’ secure metropolitan network could be built within reach of current technologies,” he added.

Sharp bends
According to Guo and colleagues, one of the main challenges involved in bringing QKD to existing fiber-optic networks is that they are inevitably subject to much stronger perturbations caused by changing environmental conditions and physical stress. “This in turn causes severe disturbances of the transmitted quantum states,” they explain.

Commercial networks also suffer from higher losses because of the various splices, sharp bends and inter-fiber couplings used in a real-world link, compared with a laboratory setup optimized for QKD.

“The software and hardware of CV-QKD modules must not only be designed to cope with all the conditions affecting the transmission fiber, but must also be robustly engineered to operate in premises designed for standard telecom equipment,” states the team, adding that because the systems need to run continuously and without frequent attention, they must be designed to recover from any errors automatically, thus preventing service interruptions.