French analyst team predicts that market will more than double in value by 2024. 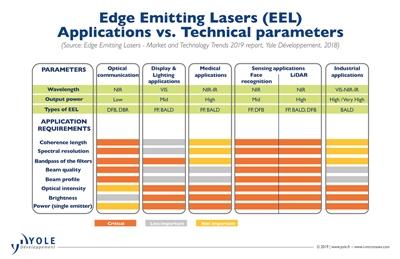 The market for edge-emitting laser diodes will more than double in value over the next five years, and be worth an annual $5.1 billion in 2024.

That’s the bullish prediction from analysts at Yole Développement, the market research and consultancy company based in Lyon, France.

Unsurprisingly, Martin Vallo and colleagues say that the compound annual growth of 13 per cent will be powered largely by the optical communications sector - currently in rude health, it seems. Right now, applications for edge-emitters in communications networks account for just under $1.4 billion of the total $2.5 billion sector.

By 2024, demand for more and faster communications will propel that figure to $3.4 billion of the total $5.1 billion - an even higher proportion of the wider market than the current 56 per cent reported by Yole.

On the other hand, the demise of optical data storage - once the largest market for laser diodes - will continue. Now worth just $155 million every year, that combined value of data storage and printing applications will shrink to just $50 million by the middle of the next decade.

Yole says that, of the other markets served by edge emitters, materials processing and display applications are the most significant, representing 16 per cent and 14 per cent of the market respectively in 2018.

“However, their market shares will decline in the future as 3D sensing in lidar, and face/gesture recognition, medical, and lighting applications emerge in the next five years,” predicts the analyst firm. “Those might represent potential killer applications for edge-emitting lasers in the middle/long term.”

The Yole report also notes the large degree of fragmentation in the edge-emitter industry, something that it has in common with the wider photonics industry.

“Each application addresses a specific supply/value chain, and different positions have to be developed by industrial [companies] to access different markets,” explains Yole. “Leading players in the material processing domain are vertically integrated from [edge-emitter] device to laser system, for example making laser dicers, as customers require turnkey solutions for their specific manufacturing process.

“For sensing or lighting applications, the trend is for companies to be much more specialized, as in pure [edge-emitting laser] device manufacturers, as there are still plenty of challenges at device level with increasing performance, beam shaping, and decreasing cost,” it adds.

“Another good example is the datacom industry, which highlights a diversity of positioning along the supply chain.” 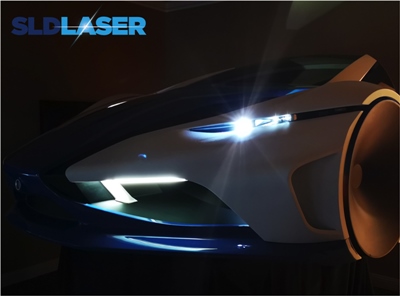 Aimed at applications in entertainment, architecture, avionics, search and rescue, and more, SkyBeam is said to deliver an extraordinary 6 million candelas of luminous intensity, and able to operate over a range of 5 kilometers.

The much higher brightness of this kind of source, compared with LEDs, could – in SLD’s view – revolutionize the lighting industry just like LEDs did a decade ago.

Company president James Raring said that by delivering more than ten times the brightness of LEDs, these kinds of products can extend the range of illumination dramatically, and offer precise shaping alongside minimal power consumption. “Beyond lighting, [it] provides the capability for high-speed data transmission and 3D sensing,” he added.