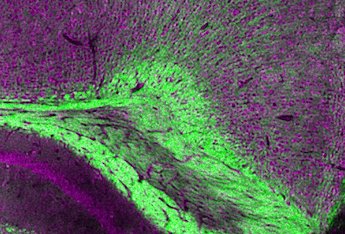 Mid-infrared (MIR) microscopy is good at delivering chemical and structural information about biological samples without staining, but not so effective at offering high lateral resolutions thanks to a susceptibility to diffraction. It also suffers from high background noise because of the strong absorption of water, ubiquitous in biological samples.

A project from Lihong Wang's group at Caltech has now demonstrated a possible solution, by developing a method based on photoacoustic (PA) detection in which the PA effect is highly localized with a pulsed ultraviolet laser.

The approach could offer a route to convenient high-resolution and high-contrast MIR imaging of fresh biological samples, free from the background interference of water molecules. The work was reported in Nature Photonics.

"Conventional MIR microscopy requires extensive processing of the sample," commented Wang. "You can only label so many molecules at a time, and you have to do a washing between labelings. And some molecules don't absorb dyes and don't get labeled at all."

Wang, one of the pioneers of photoacoustic techniques, previously reported how the use of UV wavelengths in PA microscopy could be of particular use in certain scenarios, such as the detection of tumor margins. Now the new technique, termed ultraviolet-localized mid-infrared photoacoustic microscopy (ULM-PAM), employs both IR and UV lasers. An initial UV laser pulse is followed by a subsequent pulse of MIR light to heat the sample, and then another UV burst as a probe pulse.

"First, a UV laser pulse generates a baseline PA signal," commented the project in its published paper. "As soon as a MIR laser pulse heats up the same region, a second UV laser pulse induces another photoacoustic signal, where the two laser pulses are separated by a sub-microsecond time interval that is shorter than the thermal confinement time."

The second PA signal is stronger than the first, thanks to the local temperature rise already present, and the spatial resolution is mainly determined by the focal diameter of the UV beam. In particular, the lateral resolution is diffraction limited and related to the UV wavelength and the NA of the microscopy system.

In trials on mouse fibroblast cells and 300-micron-thick sections of mouse brain, the Caltech team confirmed that this effectively enhanced the MIR imaging resolution by at least one order of magnitude, improving it from approximately the value of the MIR wavelength to that of the UV wavelength.

Since water has an extremely low absorption coefficient in the UV region of 200 to 230 nanometers, this approach also serves to suppress the water background from MIR absorption in fresh biological samples.

"To our knowledge, among the existing far-field MIR imaging approaches, ULM-PAM has achieved the highest imaging resolution at 250 nanometers, which can be further improved by using a higher-NA objective lens and a shorter ultraviolet wavelength," said the team in its paper. "In addition, ULM-PAM can potentially bridge the resolution gap from 100 to 400 nanometers between existing MIR modalities."

Further work by the team will be aimed at issues such as the noise inherently introduced by the use of two non-identical UV pulses, and the way that imaging speed is potentially restricted by the pulse repetition rates of the lasers.

Wang believes, however, that the technique will prove valuable for the imaging of a number of different biological specimens, and ultimately could achieve nanoscale far-field chemical imaging by extending the wavelength of the probe beam to the X-ray regime.

"I want to move this to in vivo, and I want to use this to image cancer cells during surgery," he said. "That would be the dream."