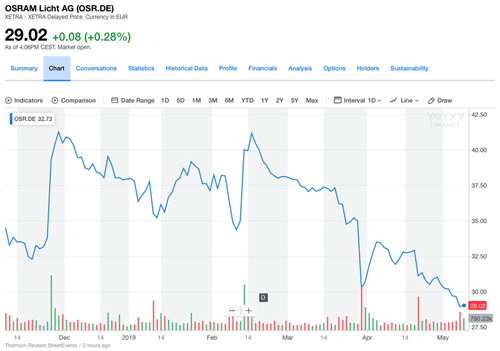 In trading figures announced this week, Osram's depressed performance in the second quarter of 2019 was “as expected”. Revenues for the recently self-styled photonics company on a comparable basis slumped by 13% to €862 million in the period from January to the end of March, 2019.

This latest set of poor numbers reflecting difficult trading conditions follows similar earlier announcements by the company as reported by optics.org in February 2019 and in August, 2018.

Olaf Berlien, CEO & Chairman, commented, “Our performance in the second quarter was as expected. We continued to face a challenging environment in the first three months of 2019. Continued market weakness in automotive, general lighting and mobile device markets clearly impacted Osram.

“In addition, business was facing the ongoing impact of the general economic slowdown and, of course, political uncertainties. This has affected demand and led to inventory build-out, especially in China.”

“Adjusted earnings before special items was €70 million, resulting in a margin of 8.1%. Free cash flow was mainly impacted by CapEx and, of course, of inventory. It amounted better than last year but to minus €76 million,” he added.

The analysts conference heard that the company has been taking action to cut costs. Osram had trimmed its headcount from 25,600 to 25,000 last year. In March, 2019, the Germany-based firm had expanded various initiatives to reduce its annual cost base. “We now expect savings of more than €200 million by 2021,” said Berlien.

The company blamed its earnings decline “in part, on the continuing weakness of the automotive, general lighting and mobile device markets. This has led to high inventory levels, particularly in China. In addition, the general economic slowdown is adversely affecting business development.” 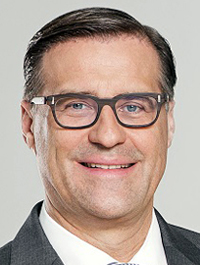 Berlien said, “In our 113-year history, we have repeatedly experienced challenging times, but each time we have emerged stronger than before. Our long-term strategy of implementing new applications in the LED sector remains intact. The focus is on optical semiconductors, automotive and digital applications."

In the past quarter, the firm's Opto Semiconductors division recorded a decline in sales of around 18.8% on a comparable basis. This reflects not only the economic effects but also the weakness in the automotive industry and general lighting.

High inventories in Asia further curbed development. Sales in the automotive division were 10.6% lower due to reduced expectations worldwide in the automotive industry. In the Digital division, sales fell by 8.5% due to the weakness in general lighting and the control gear business.

As announced in March, Osram’s Management Board expects a decline in revenue from continuing operations of 11 to 14%, an adjusted EBITDA margin of 8 to 10% and a negative free cash flow of between €50m and €150m for the full 2019 financial year.

In mid-February, Osram announced that management was in closer talks with investment firms Bain Capital and The Carlyle Group about a possible takeover. Berlien this week commented, “The due diligence process continues. As communicated from the beginning, it remains to be seen whether an agreement will be reached.”