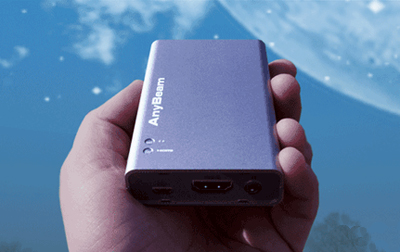 It is said to be the world's smallest pocket cinema projector and to offer the power to project a crystal clear picture on to a surface. Powered by an ordinary power bank, a user can plug-and-play with various sources, such as smart phone, laptop or tablet.

Measuring just 19 x 60 x 103mm, the 140g projector will fit in a pocket. Despite not being much bigger than a smart phone itself, this mini-projecter is fitted with a laser module with the power to project screens up to 4m across inches and beyond, says its developer, London, UK-based Nebra Ltd.

Nebra CEO Aaron Shaw commented, “This technology really has the power to revolutionise the projector industry. Projectors used to be bulky, noisy and expensive - but the laser module in Nebra AnyBeam is tiny, efficient and affordable.

"While AnyBeam may be small, the picture isn't. These projectors can create a perfectly sharp image up to 4m across, and beyond, with no need to focus. All you have to do is find a surface big enough. The laser source means a lower cost, greater power efficiency and better quality projections than Digital Light Processing alternatives.” 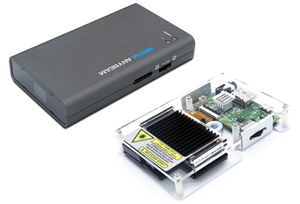 Projector board can go on a Raspberry Pi.

Nebra’s stated development plan is ultimately for there to be four products in its AnyBeam projector range: