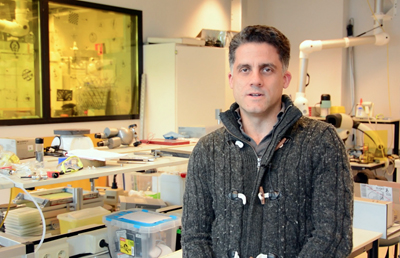 Researchers of the University of Twente, Netherlands, have developed a laser-driven micro-jet injection technology that does not require needles. Instead, an ultrafast liquid jet with the thickness of a human hair is forced through the skin. The team says that the process is not painful and there is less waste of injectant.

Research was conducted in the Mesoscale Chemical Systems group, part of the University of Twente’s MESA+ Institute. The work is described in an article in the Journal of Applied Physics, in which the scientists compare both the needle and the so-called “fluid jet” approaches.

The Twente team reports that about 44 million Europeans already possess at least one tattoo: “Despite its wider acceptance in society, the underlying [needle-delivered] technique has not changed in centuries and still presents health risks."

The needles, which deliver ink under the skin’s surface, is painful and can damage the skin. Furthermore, needles must be disposed of in a responsible way, and ink or other injectatnts are often wasted,” stated new technique developer assistant professor David Fernández Rivas and colleagues. Remarkably, he added, conventional needle technology has never been subject of research in such a thorough way, using high-speed images.

The growing bubble pushes out the fluid, medicine or ink, at 100m/s.

The new technique employs a laser for rapidly heating a fluid that is inside a microchannel on a glass chip. Heated above the boiling point, a vapour bubble forms and grows, pushing the liquid out at speeds up to 100m per second. The jet, about the diameter of a human hair, is capable of going through human skin. “A patient does not feel much of this – "no more than a mosquito bite”, say Fernandez Rivas.

The Journal of Applied Physics article reports, “A continuous wave (CW) laser diode with a wavelength λ=450nm is focused at the bottom surface of a glass microfluidic device. In the first experiments, an aqueous solution of a molecular dye matching the laser wavelength partially fills the device. The liquid heats up above its boiling point in a few microseconds with an explosive phase transition resulting in a fast growing vapor bubble inside the microdevice.

“The bubble growth, the liquid jet formation, and the penetration into agarose slabs were recorded at ∼400,000fps using an ultra high-speed camera (Phantom v2640). The camera sensor is protected from the laser light using a colored glass filter centered at λ=450nm. The camera has an electronic shutter as short as 150 ns. As in the solid injector set up, the system is illuminated from the back using a LED cold light source (Schott KL 2500 LED) with a white diffuser in between.”

The researchers conducted their experiments with a number of commercially-available inks. Compared to a conventional tattoo machine, the micro-jet consumes a small amount of energy. More importantly, it minimizes skin damage and the injection efficiency is much higher, so there is no loss of fluids; and no risk of contaminated needles. 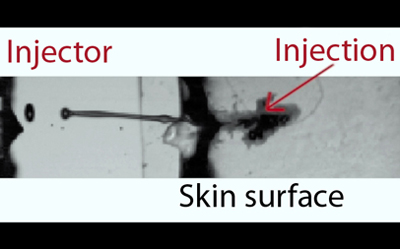 How the laser pulse-driven injectant passes through the skin into a patient’s tissue.

The current microjet is a single one, while tattooing is often done using multiple needles with different types or colours of ink. Also, the volume that can be delivered by the microjet still needs to be increased. The team says these are the next steps in progressing the needle-free technology.

Looking ahead, the Twente team commented, "In today’s medical world, tattoo-resembling techniques are used for treatment of skin, masking scars, or treating hair diseases. These are other areas in which the new technique can be used, as well as in vaccination. A challenging idea is using tattoos for cosmetic purposes and as health sensors at the same time. What if ink is light-sensitive or responds to certain substances that are present in the skin or in sweat?

“A tattoo could warn its owner about experiencing too many hours of sunlight exposure, or when it is time to take a medication. Besides their cosmetic role, tattoos could get new functionality from intelligent ink. And that would require a more precise and less invasive injection technique.”