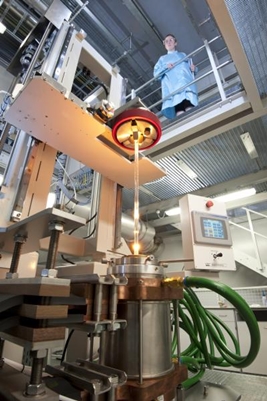 Launched last week on board a Cygnus cargo ship carrying more than seven tons worth of supplies and scientific experiments into orbit, the optical fiber will be produced using an engineering prototype built by engineers at US-based Physical Optics Corporation (POC).

“This NASA-sponsored advanced materials research study is intended to evaluate the feasibility of producing high-quality increased bandwidth optical fibers in zero-gravity,” announced the Torrance, California, company in a release.

POC explains that the zero-gravity environment should eliminate the defects in the manufacturing process that occur on Earth, where optical fiber is made using a special drawing tower.

The company believes that negating the effects of gravity will reduce the amount of crystallization that occurs during fiber production – meaning that the fiber's optical transmission characteristics will be massively improved.

“The elimination of these defects should increase the transmission characteristics of these fibers by 10x,” claims POC. “These optical fibers provide a unique optical transmission spectrum and have potential use in space-based applications such as remote sensing, lidar, high-power lasers, multi/hyperspectral imaging, atmospheric monitoring, and optical data communications.”

ZBLAN for broadband transmission
According to a Small Business Innovation Research (SBIR) proposal summary describing the planned experiment, the idea is to produce “ZBLAN” fluoride glass in orbit, to provide optical fiber with a very wide transmission window extending from the ultraviolet to mid-infrared regions of the spectrum.

When drawn in a conventional fiber tower using gravity, the relatively small difference between the material’s glass transition and crystallization temperatures makes production of ZBLAN fiber prone to crystal defects.

In the original SBIR mission proposal, POC wrote that the initial phase of the orbital production module experiment involved demonstrating a fiber draw process using an in situ coating and a novel method for starting the draw from a preform in zero gravity.

If successful, a second phase of the mission may look to extend the approach to rare-earth doped fibers that are typically used inside fiber lasers.

POC’s VP of advanced technologies, Ranjit Pradhan, said: “If the experiment is successful, there are many fields that can benefit from a higher quality fiber-optic material such as telecommunications, laser surgery, and other industrial and military applications. POC is very excited to be bringing this type of revolutionary innovation to so many potential industries.”

Aside from its potential use in space applications, there is the possibility of using space-drawn optical fiber back on Earth. In its SBIR proposal, POC highlighted the possibility of commercial deployments in applications ranging from infrared countermeasures to fiber delivery of mid-infrared light from quantum cascade lasers.

“The possibility of low-loss ZBLAN fibers beyond the existing state-of-the-art can also revolutionize optical communications, and have use as 1.3 µm telecom amplifiers,” noted POC, adding that the medical sector might also find a use for the technology in advanced portable diagnostic equipment.