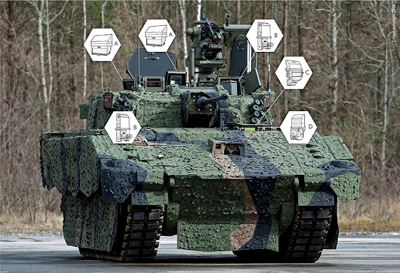 The compact periscope offers the driver of an armored fighting vehicle (AFV) twin images of the environment. At the touch of a button, the image switches between shortwave or visible light.

“It provides an armored vehicle with enhanced situational awareness for drivers,” said J. J. Conboy, the sales manager, defense for StingRay Optics and representative of Kent Periscopes at the Defense and Commercial product exhibit hall. StingRay and Kent Periscopes are part of the Gooch & Housego group.

The new periscope is a drop-in replacement for the traditional AFV scopes, known as image-intensified models, and makes use of the photodetector InGaAs, or indium gallium arsenide.

Kent calls the scope “an upgrade for existing Passive Driver’s Periscope (PDP) installations, which maintains an identical space envelope above armor with minimal changes below armor.” It uses the same power specifications and connections as the scope that it will replace.

In short, it eliminates the need to swap out the old unit for day time maneuvers. “This enables the driver to drive at night, hatch down, without the use of artificial illumination and at speeds comparable to those achievable in daylight. Its features include binocular and LCD view options and a customizable camera payload.

Its day/shortwave infrared mode can see from daylight down to 10-3 lux. It can see through smoke, haze, fog, or precipitation, and does not suffer from thermal dusk/dawn.

Its day/TI (long- and medium wave infrared options) can see from daylight down to 0 lux using the TI camera. It lets the user switch between color day camera and TI camera.

The periscope is designed to easily insert into the slot occupied by an older model periscope on the armored roof of the vehicle’s cabin, with a viewfinder at eye level to provide a driver with maximum day or thermal night visibility and situational awareness of the outside world.

The Kent Periscopes design includes a sensor suite with a day charge-coupled device (CCD), low light camera and a SWIR thermal camera. It uses SWIR as an alternative to previous long-wave infrared (LWIR) systems, and can overlay images from the thermal camera onto the day CCD or low light camera images. That lets drivers read road signs and drive in challenging weather conditions such as heat haze and fog.

The system can also record footage, making it an ideal training aid. Visibility, Kent says, would remain excellent even in the coldest of environments and can meet the sighting needs of drivers, gunners and commanders, who need to see out for many kilometers, to see at night, and overlay information onto their screens.