A quarter of women who responded to study jointly commissioned by SPIE and OSA reported harassment at meetings. 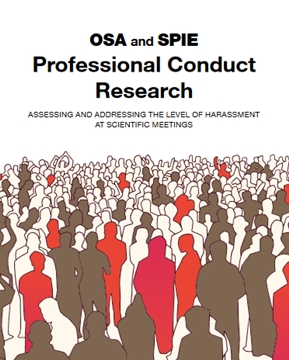 A new survey of attendees at scientific meetings organized by SPIE and The Optical Society (OSA) has revealed that nearly one in ten respondents has experienced harassment at such events.

Jointly commissioned by the two optics and photonics societies, the survey defined harassment as “being bullied, or made to feel uncomfortable”.

Inappropriate behavior
Typical examples of harassment reported by survey respondents included biased comments about them, being belittled, or being asked inappropriate questions. Some 28 per cent of those who said they had been harassed reported being touched or grabbed, with 24 per cent saying that they had been followed or stalked.

Strikingly, the survey also found that “only about one per cent” of those who either witnessed or experienced harassment indicated that they had reported such an incident to either society or venue staff. That was largely because harassed individuals did not know how to report incidents, coupled with worries about being taken seriously or labeled a “trouble-maker”.

In response to the survey results, OSA’s 2019 president Ursula Gibson said: “For those in our community who are not convinced that this is a real issue, the survey is essential in creating a baseline to help guide us on policies needed to address incidents of harassment. We must continue every effort to eliminate harassment in all of its forms.”

Current SPIE president Jim Oschmann added: “Our members and constituents deserve a professional, creative, inclusive, and diverse environment in which to engage with their peers, and we are committed to providing that for them.”

Oschmann sees the survey results as a first step in implementing robust anti-harassment policies across the communities represented by SPIE and OSA.

Anti-harassment policies; confidential reporting
The two societies have been working together to establish appropriate codes of conduct, and have each adopted an anti-harassment policy. Specific actions now implemented include ensuring that society staff who are on site at events are trained to assist any attendees who want to report an incident.

Other measures include ensuring that technical session moderators and chairs are trained to respond to incidents including the use of inappropriate imagery or comments during presentations, or of bullying behavior. Exhibitors at events are also told to eliminate any imagery or slogans seen as offensive, demeaning, or objectifying.

At SPIE’s Photonics West meeting in February, SPIE offered a confidential reporting system including a toll-free number and a web site where incidents could be logged anonymously.

“Providing a professional and safe conference environment, plus raising awareness of harassing behaviors, are critical priorities to SPIE and OSA,” said SPIE CEO Kent Rochford at the time.

Following the survey outcome, Rochford added: “Harassment is the worst kind of obstacle to our mission, and, together with our OSA colleagues, we have a zero-tolerance, anti-harassment policy that we stand firmly behind.”

OSA’s CEO Elizabeth Rogan commented: “We are keenly aware of the negative impact of harassment from a professional and personal standpoint, and recognize the urgency in addressing this issue head-on.”

• The survey results, which include an appendix with descriptions of specific incidents, can be downloaded here. SPIE’s anti-harassment policy is available here; OSA’s policy, code of conduct, and reporting mechanism are available here.