University of Sheffield is supplying the only European device on NASA's High Altitude Student Platform. 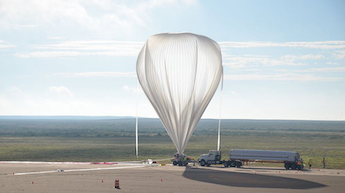 Images of the sun taken by a balloon-launched platform developed at the University of Sheffield could help study the solar chromosphere, as well as point towards future low-cost autonomous solar telescopes.

Christened SunbYte, the latest iteration of Sheffield's device is due to launch in October 2019, after successful flights of earlier versions in 2018.

It is currently due to be the only European instrument to fly on board NASA's High Altitude Student Platform (HASP), a zero-pressure scientific balloon launched from New Mexico. The initial iteration of SunbYte flew under the REXUS/BEXUS, or Rocket and Balloon Experiments for University Students, program operated by the ESA.

The Sheffield instrument has been designed to operate autonomously, observing the sun in the H-alpha spectral line used by solar physicists to observe the sun's chromosphere.

"With the SunbYte payload we are hoping to show that high quality images of the sun can be captured remotely by student teams at low cost, as this is normally only available to large research institutions and space agencies," commented Roisin Clear of the University of Sheffield.

The instrument's design philosophy is intended to indicate paths towards relatively simple and low cost platforms for astronomical observations, exploiting advances in manufacturing techniques such as additive manufacturing and 3D printing.

The optics in the first prototype of SunbYte, launched in 2014, were based on PiKon, a £100 telescope built around a Raspberry Pi single-board computer. The design involved a concave mirror focusing an image directly onto the Pi camera sensor, mounted onto components created by 3D printing. The university subsequently enhanced the platform's performance via larger mirrors, specialist optical filters and a higher resolution camera.

SunbYte III, the newest iteration due to fly to an altitude of up to 40 kilometers with the HASP 2019 balloon, improves the design further, with particular steps taken in the stabilization, sun tracking, and data collection systems necessary to obtain full-disk images of the sun at the H-alpha spectral line.

The project forms part of the University's Sheffield Space Initiative, a program intended to accelerate and enhance the impact of the space-related research carried out at the University.

"The level of competition to be on board the high altitude balloon was very high, and SunbYte will be the only payload on this flight from outside of the USA," commented Sheffield's Gary Verth. "Students are currently assembling and testing SunbYte ahead of the integration with NASA’s High Altitude Student Platform gondola in July, before the actual launch in September 2019."
More from Applications
Blue laser diode enables micro-optics to better control beam shape
Flir announces partnership with RealWear, a developer of AR wearables
Seno Medical launches optoacoustic imaging system for breast cancer
Steerable soft 'fiber' robots could enhance medical applications
OpenLight launches PDK for ‘unified electronic and photonic platform’
RELATED LINKS
RELATED STORIES