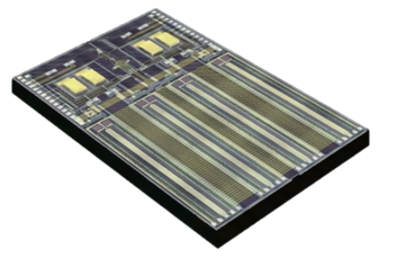 Building on their existing relationship, communications chip firm MACOM and GlobalFoundries (GF) will use the latter’s semiconductor fabrication facilities in New York and Singapore to mass-produce what they call laser-PICs (L-PICs).

“The collaboration will leverage GF’s 300 mm silicon manufacturing process to deliver requisite cost, scale and capacity that is expected to enable mainstream L-PIC deployment for hyperscale data center interconnects and 5G network deployments at 100G, 400G and beyond,” said the two firms, in an announcement timed to coincide with the Optical Fiber Conference (OFC) event taking place this week in San Diego.

Alignment challenge
Fabricated using a silicon-on-insulator (SOI) wafer process, the L-PIC approach is said to solve the remaining key challenge for silicon photonics – aligning a laser with the various modulators, multiplexers, and detectors that provide functionality inside the PIC.

The Lowell, Massachusetts, company adds that the approach is able to couple up to 80 per cent of light into the PIC.

Alex Behfar, MACOM’s senior VP for photonics, also claims on the company’s web site: “The unique combination of our leading-edge laser design and manufacturing competency with our silicon PIC design talent, has yielded breakthroughs that unlock the potential of L-PICs, starting in places like data centers but with lots of legs into different markets in the future.”

Behfar initially developed the technology involved via the startup firm BinOptics, a spin-out from Cornell University. MACOM acquired BinOptics for $230 million back in 2014, attracted in part by the ability of the EFT approach to dramatically reduce the cost of a low-yielding facet cleaving operation during the laser production process.

Another critical feature of the technology is that it enables laser diodes to be fully fabricated and automatically tested while still on the host wafer – an advantage shared with vertical cavity surface emitting lasers (VCSELs).

Burgeoning demand
Not long after the BinOptics acquisition, MACOM’s CEO John Croteau said that the deal was already “shaping up to be a goldmine", with heavy demand for indium phosphide (InP) devices exceeding initial expectations.

“With the demand for bandwidth doubling inside data centers each year, cloud service providers are supply constrained in moving to 100G and beyond,” claims Croteau now, adding: “On top of this, telecom carriers are now adopting the same CWDM and PAM-4 optical standards for their 5G network buildouts. The ability to efficiently scale transceiver capacity and manufacturing throughput is critical.”

The CEO says that by aligning the capacity expansion between GF’s silicon photonics technology and MACOM’s EFT lasers, and moving to 300 mm SOI wafers, the strategic collaboration will allow the two firms to meet burgeoning industry demand for years to come.

GF’s CEO Tom Caulfield added: “We have built an incredible foundation as a leader in providing silicon photonic solutions and advanced packaging capabilities that enable our clients to build a new generation of high-performance optical interconnects.