University of Western Australia project could assist in cancer diagnosis and treatment. 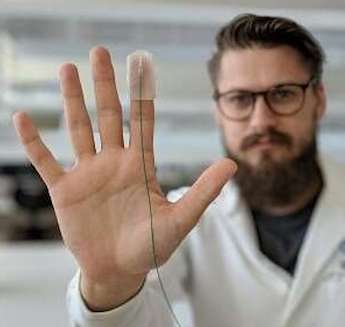 Elastography, in which tissue elasticity is mapped by combining data from both optical imaging and mechanical deformation, is known to be a valuable source of information for the diagnosis of certain diseases.

Optical coherence elastography (OCE), where OCT provides the optical imaging capability, has been particularly attractive, with cancer treatment offering one area where OCE's ability to detect the relatively stiff tumor in the surrounding flexible tissue could prove valuable.

To date, however, OCE probes have applied their mechanical loading using bulky mounted set-ups or by motorized stages, that are impractical for routine use by clinicians.

A novel OCE probe developed by the University of Western Australia (UWA) could offer an alternative approach, in which the sample arm of an OCE system is encased in a 3D-printed thimble and worn on the finger.

This device is said to represent the first finger-mounted, and indeed first wearable, version of OCE. The findings were published in Biomedical Optics Express.

"Our new probe aims to enhance the surgeon's subjective sense of touch through quantified, high-resolution imaging of tissue stiffness," said Rowan Sanderson of UWA. "This could make it easier to detect and remove all the cancerous tissue during the first breast conserving surgery, which would reduce the physical and psychological burden and cost that accompanies re-excision."

In its published paper, the project describes its technique as an example of quantitative micro-elastography (QME), an approach which combines compression OCE with a suitable stress sensor, implemented in the UWA platform via a fiber probe connected to a spectral-domain OCT system.

Phase-sensitive detection methods estimate the elasticity of a sample by combining the surface stress, measured using a compliant layer between the probe and the sample, with the local axial strain measured throughout the OCT field-of-view.

For the new finger-mounted QME, the probe is pressed perpendicularly into the tissue while OCT images are recorded. Elastograhy results are acquired by swiping the finger along the tissue surface and using the finger motion as both the scanning and mechanical loading mechanism, and signal processing methods then compensate for any motion artifacts induced by the finger.

In trials, the probe was used on silicone phantoms containing a stiff inclusion, designed to mimic healthy and diseased tissues in the breast. A preliminary 2-D image was obtained and found to be less accurate than when the experiment was performed without scanning, although the researchers say that the prospect for imaging by swiping the operator's finger remains an encouraging future prospect.

"The contrast between sample features was still evident, which indicates that 2-D scanning holds a lot of promise going forward," said Sanderson.

The team also used the probe on a sample of kangaroo muscle, and used it to monitor the change in elasticity as the tissue was heated in boiling water.

Having trialed the technique, the UWA team intends to improve the accuracy of its 2D scanning operation as a step towards ultimately being able to generate 3D scans of tissue by the same method. If such scans prove possible, the expectation is that finger-mounted QME might augment existing clinical practices that rely on manual palpation.

"By preserving the sense of touch, we aim to conserve the existing clinical workflow and increase the likelihood that this technology would be adopted for wider clinical use," said Sanderson.