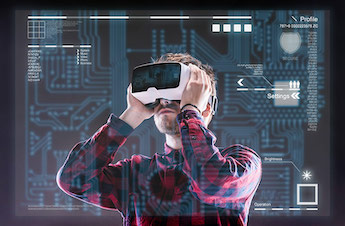 CEA-Leti, the Grenoble-based research institute for electronics and information technologies that forms part of the French government-funded CEA research organization, has developed an approach to augmented reality (AR) optics said to overcome the habitual limitations of existing AR glasses.

Unveiled at SPIE Photonics West in San Francisco, the technology involves a combination of integrated optics and holography.

In the new design, a transparent retinal-projection device directs light waves to the eyes from a glass surface, and the images perceived by the viewer are formed at the retina by the interference of light waves. The light propagating in the air does not form an image until it interferes precisely in the retina, which is intended to eliminate the need for optical systems or combiners.

This contrasts with the established approach to AR, in which visual information is transmitted from close to the eyes with high directivity by a microdisplay. These small images are transformed by suitable optical systems to allow a user to view them despite the small focusing distance, and a suitable combiner superimposes the digital image to the viewers’ vision of the real environment.

CEA-Leti’s integration of the new principle and its use of a holographic layer could allow for the design of compact AR glasses with a larger field-of-view than existing systems, while the transparent retinal projection device means that ambient light can pass through the device for enhanced AR applications.

"Combining integrated optics and holography is a new research area for the scientific community developing display applications," said Basile Meynard, lead author of the paper presented at SPIE Photonics West. "It is also a way to imagine a display device that works more as a data transfer system than an imaging system."

The project's presentation noted that its concept of combining integrated optics with holography into a novel retinal projection platform involves optical circuits of silicon mononitride (SiN) waveguides and a pixelated holographic layer for visible wavelengths.

"The SiN waveguides are transparent, allowing ambient light to pass through the device for augmented reality applications," said the team, whose study focused on the design of components suitable for use in an optical circuit employing light of 532 nm wavelength. These items included single-mode waveguides, bent waveguides, diffraction grating couplers, multi-mode interference splitters and directional couplers.

"Starting with single-mode waveguides to efficiently transport light around the circuit, many other components were designed to manipulate light in different locations. Components for extracting the light, such as diffraction gratings, were also designed and simulated. The team minimized losses of different parts of the circuit, such as waveguide-bending areas, to increase energy efficiency of the system."

The CEA-Leti approach will now require further development before it reaches the commercialization stage, but in the medium to long term, the retinal projection concept is expected to support more compact and higher quality virtual-image applications, including uses similar to existing AR glasses.

This research project builds on existing experience at CEA-Leti in the development of micro-displays for near-to-eye displays, including OLED and LED technologies. More recently, the institute has also made significant strides in the field of inorganic LED display manufacturing.

"Our teams are continuously looking for potential disruptive technologies that could pave the way to new families of display devices down the road," said Christophe Martinez, project leader at CEA-Leti. "The investigation into retinal displays is part of this exploration of future optical solutions."