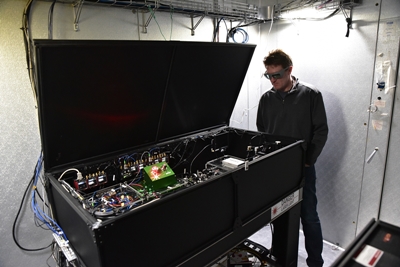 New photonics technology installed on a large optical telescope in Texas is now thought capable of detecting Earth-like exoplanets, after a long-running development effort by a team led by the US National Institute of Standards and Technology (NIST).

Exploiting advances made in the reliability of telecom-grade electro-optic modulators, chip-level nonlinear waveguides, and infrared sensors, Scott Diddams and colleagues have just reported in the journal Optica that the precision of their laser frequency comb is good enough to detect frequency shifts in the light from so-called “M dwarf” stars caused by planets with a similar mass to Earth.

Since May 2018, the comb equipment has been up and running on the 10 meter-diameter Hobby-Eberly Telescope (HET), one of the largest optical observatories in the world.

“The comb immediately allowed our Penn State colleagues to make measurements they could not otherwise make,” said Diddams, a NIST Fellow. “These improved tools should allow us to find habitable planets around the most ubiquitous stars in our galaxy.”

Planet-hunting
While hundreds of exoplanets have been discovered using photometry and by analyzing the “star wobble” caused by gravitational effects, it is difficult to characterize Earth-sized planets in the habitable zone using those more conventional techniques.

Future observatories like the James Webb Space Telescope and various super-sized ground telescopes currently under construction should be able to directly observe these kinds of planets, and even characterize gases in their atmospheres. In the meantime, the comb technology could be used instead.

Providing tailored light to the Penn State team’s “habitable zone planet finder” spectrograph, the NIST comb acts like a very precise ruler, to calibrate and track the exact frequencies that make up each star's fingerprint emission spectrum, and detect any periodic variations.

The technology has been in development for several years, and the collaborators at NIST, Penn State, and Colorado University completed a test run in 2012 that showed the promise of the new approach. 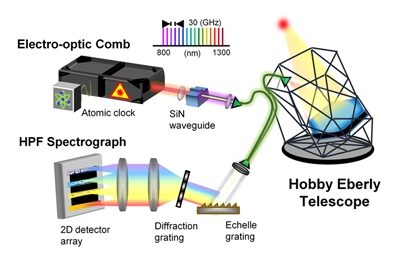 Fiber amplifier
The latest version of the comb was delivered and saw “first light” almost exactly a year ago, and has been running nightly since May 2018. The new comb has a broader light range and is more stable than the earlier demo version, says NIST.

The equipment is based around a 1064 nm continuous-wave semiconductor laser source that feeds waveguide electro-optic modulators driven by a 30 GHz microwave source.

According to the team, this results in a comb comprising approximately 100 teeth, spaced exactly by the microwave drive frequency.

After being passed through a 30 GHz Fabry-Perot cavity, the frequency comb is then amplified in an ytterbium fiber amplifier, spectrally broadened and temporally compressed to a pulse width of 70 fs, and then focused into a 25 mm-long nonlinear silicon nitride waveguide.

That delivers a supercontinuum spectrum spanning the 700-1600 nm wavelength range, with the entire comb system assembled on a 60x150 cm optical breadboard (see photo at top) and cooled cryogenically at the HET observatory.

Complementary kit
Dubbed the “Astrocomb”, the equipment complements similar kit such as the High Accuracy Radial Velocity Planet Searcher (HARPS) instrument installed on a smaller telescope at La Silla Observatory in Chile, which is dedicated to visible light measurements.

“Our stellar radial velocity (RV) measurements with scatter of 1.53 m/s are presently the most precise achieved in the near-infrared (NIR) with HgCdTe detector arrays, and now approach the best RV measurements with more mature visible wavelength silicon detectors and associated technology, to the best of our knowledge,” concludes the team in its paper.

“Within this context, the instrumentation and techniques we introduce represent a significant step towards the long-desired goal of RV spectroscopy in the NIR with precision at (and below) 1 m/s, as will be critical for the discovery and characterization of Earth-mass planets in the habitable zones of the nearest stars.”