Project aims for better understanding of how light affects health. 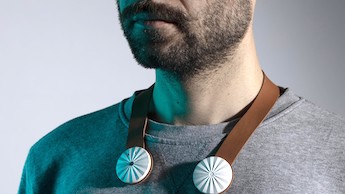 Swiss research lab EPFL and the Geneva School of Art and Design have collaborated on the development of a wearable light sensor that measures how much light an individual is exposed to during their normal routines, along with the spectral resolution of that light.

The prototype device can rest around the neck or be attached to an item of clothing with a magnetic pin, and the project has now received funding to develop a modular version for testing in further real-world conditions by 2021.

EPFL envisages founding a spin-off to bring the sensor, christened Spectrace, to both the wider scientific community and the general public. Its initial findings were published in Current Opinion in Behavioral Sciences.

"We urgently need to pay more attention to our 'light hygiene'," commented Marilyne Andersen of EPFL's Laboratory of Integrated Performance in Design. "We should in fact be getting plentiful light that is rich in blue wavelengths during the day, as this will make us feel better, and limiting this exposure well before bedtime."

The significance of blue light indicates the role that melanopsin, a blue-light-sensitive pigment found in the human eye, is known to play in regulating the body clock and synchronizing the circadian rhythms. But data on the full light spectra experienced by people during a normal daily cycle is currently limited.

"Most spectrometers rely on a scanning linear CCD which limits their size and affordability," commented the project in its paper. "New technology using array-based sensors is now able to measure at 5-nanometer resolution within the visible range. These can be integrated into portable spectrometers worn at the face plane, and may provide a more accurate assessment of the light reaching the eye."

For Spectrace, the project sourced a miniature spectrometer designed for the food processing industry by nanoLambda of South Korea. EPFL then repurposed the spectrometer to turn it into a wearable device with a built-in UV sensor and photometer that offers a time resolution of less than a second.

The designing of a wearable sensor was carried out by Geneva School of Art and Design, which settled on a collar-style device that could also be attached by pins if needed.

Research into the connection between ambient light and health has been underway for some time, with substantial evidence available about the clinical and potential analgesic role of illumination.

Even in the field of direct phototherapy, however, the picture has proven to be complex, especially where the connection between light and perceived comfort levels is involved.

In 2017 the University of Arizona found that green light from a commercial 525-nanometer LED could enhance the pain tolerance of lab animals, and had a greater analgesic effect than blue illumination. It also found that visual perception of the light, and its entry into the eye, was key to its analgesic result at other locations in the body.

The EPFL project and its broader scope may now help to clarify further the mechanisms and neurological effects involved when humans interact with illumination.

"The flexibility and relative low-cost of wearable sensors enables researchers to effectively measure light exposure on the neighborhood and city scales, and characterize the spectral diet in a large group of individuals," noted the project team. "Data from such measuring campaigns could be then subjected to mathematical and computational models of the circadian system to determine circadian parameters such as amplitude and phase, and be made available to other researchers."