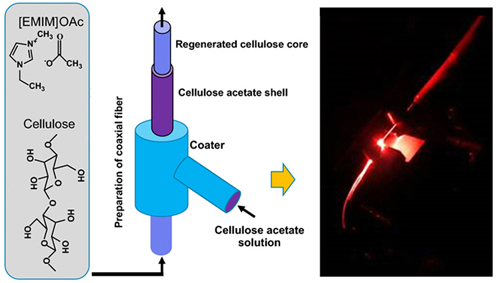 Researchers at VTT, Finland, have been able to transmit light through an optical fiber based on a wood derivative. The fiber, which is made of cellulose, is best suited for sensors that could benefit from the biodegradability of the material.

In the future, says the VTT team, optical cellulose fiber “may allow the detection of changes in the moisture level of buildings, for example.” The work has been published in the journal Cellulose.

The core of the new optical fiber is made of cellulose, modified for the purpose using ionic solvents developed by VTT. Around the core, a cladding was formed out of cellulose acetate.

Senior Scientist Hannes Orelma from VTT commented, “This research is still in its initial phases, so the we do not yet know all of the potential applications for the new fiber.”

Light travels in the fiber, because the core is surrounded by cladding material with a lower index of refraction. Light is kept in the core since it is reflected back into the core from the interface of the core and the cladding.

VTT research scientist Ari Hokkanen, commented, “We have tested the suitability of this fiber for measuring moisture levels. Using a length of fiber of just a few centimeters, we have already succeeded in increasing the attenuation of light transmitted through the fiber by many orders of magnitude.”

Cellulose has properties making it suited for use in optical fiber sensors: The material used in cellulose fibers can itself react with the substances being measured and absorb them, which is difficult for glass or plastic fibers. 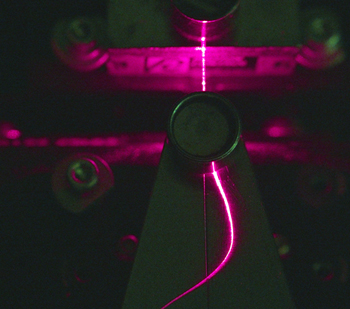 VTT has developed an optical fiber made of cellulose.

Cellulose is also easy to modify as regards, for instance, the index of refraction. The material effectively absorbs and releases water, which can be measured by the change in the attenuation of light transmitted in the fiber. In addition, cellulose is biodegradable, and the fiber used for the sensor can be disposed of with biowaste.

The new fiber opens up new opportunities for sensor applications, but, says the VTT team, “it will not compete with glass-based optical fibers in telecommunications applications.”

The development of the optical fibre began in VTT's iBex program, which allows the researchers involved to implement fascinating solutions to global challenges. Currently, the R&D continues in the FinnCERES flagship programme in collaboration with VTT and Aalto University.

“Acetylation increases the transparency of cellulose in the UV range. The optical properties of optical cellulose fibers were studied using measurement tools used for optical fibers. The study showed that the attenuation constant of the fiber was 6.3 dB/cm at 1300 nm.

“Its use in a water sensor was demonstrated and the attenuation increased reversibly over 30 dB when the 76 mm-long fiber was placed in water. The optical cellulose fiber could find applications from sensoring, in which the easy modifiability and high temperature resistance are good properties.”