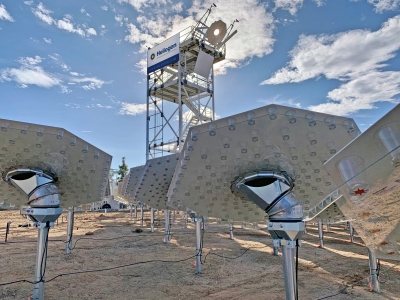 Concentrated solar power (CSP) could be used instead of fossil fuels to provide the high levels of heat needed in carbon-intensive industrial processes like cement, steel, or petrochemical production.

That’s according to Heliogen, a Californian startup with some big-name backers. The Pasadena company claims that by precisely tweaking the concentrating mirror optics of a solar thermal plant, it has been able to reach a temperature exceeding 1000°C - far higher than what has been achieved with CSP before.

“Previous commercial concentrating solar thermal systems have been designed to reach temperatures of up to only 565°C - useful for power generation, but insufficient for many industrial processes,” Heliogen explained. “Many of these processes require much higher temperatures, which have traditionally been reached through the burning of fossil fuels.”

Large carbon footprint
If the apparent breakthrough, made at Heliogen's facility in the Mojave Desert, does turn out to be applicable at an industrial scale, it would offer a way to reduce CO2 emissions from processes that are widely regarded as impossible to de-carbonize.

While much of the effort to reduce CO2 emissions has focused on finding alternative forms of energy generation and transportation, or proposed major changes to diet, cement production is alone responsible for nearly 8 per cent of global emissions.

The conventional method for making cement, which releases roughly a kilogram of CO2 gas for every kilogram of cement produced, is also extremely cheap - making it a difficult industry to disrupt with a cleaner alternative.

Heliogen’s idea is that by using highly concentrated sunlight instead of burning coal or natural gas to provide the heat source for cement production, the accompanying CO2 emissions could be eliminated.

The company uses field-sized arrays of mirrors to focus sunlight onto a central tower - the same approach that has already been used for several years in CSP energy generation.

But thanks to the combination of an ultra-robust camera providing machine vision and a simple closed-loop control system, the Heliogen team says it is possible to make precise adjustments to the position of each reflecting mirror to create a much more concentrated heat zone - a technique analogous to the way that adaptive optics reduces the blurring effect of the Earth’s atmosphere on astronomical imaging.

‘Clean’ hydrogen goal
The technology is the brainchild of Heliogen founder and CEO Bill Gross, who says he has assembled a team of scientists and engineers from the Massachusetts Institute of Technology (MIT) and Caltech to develop and refine the CSP approach for industrial-level heating.

Gross was previously the CEO at eSolar, which built a 5 MW CSP facility in Lancaster a decade ago. However, it was reportedly shut down in 2015 following unpredictable output.

While Heliogen has not disclosed any specific details about its funding, it has enlisted some extremely high-profile backers - among them Bill Gates.

In a statement announcing Heliogen’s claimed breakthrough, the Microsoft co-founder said: “Today, industrial processes like those used to make cement, steel, and other materials are responsible for more than a fifth of all emissions.

“These materials are everywhere in our lives but we don’t have any proven breakthroughs that will give us affordable, zero-carbon versions of them. If we’re going to get to zero-carbon emissions overall, we have a lot of inventing to do.

“I’m pleased to have been an early backer of Bill Gross’s novel solar concentration technology. Its capacity to achieve the high temperatures required for these processes is a promising development in the quest to one day replace fossil fuel.”

While there are some obvious limitations of the CSP approach - it would only work during daylight hours and in hot, dry locations with reliably clear skies - Gross believes it will be possible to further improve the technology and reach temperatures of 1500°C.

If that is achieved, it could be highly significant: at such a high temperature, it is possible to generate hydrogen by splitting CO2 and water molecules, providing a route to the ultimate green fuel.

In the meantime, any proof of success depends on large-scale cement makers adopting the CSP approach and using it instead of, or at least in tandem with, conventional fossil fuels.