Compact switch is first to operate at voltages low enough to be integrated in silicon chips; redirects light with very low signal loss. 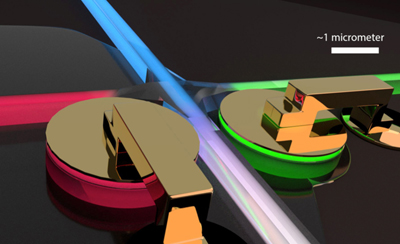 Researchers at the U.S. National Institute of Standards and Technology (NIST) and colleagues have developed an optical switch that routes light from one computer chip to another in just 20 billionths of a second — faster than any other similar device, they claim. The compact switch is the first to operate at voltages low enough to be integrated onto low-cost silicon chips and redirects light with very low signal loss.

NIST comments that the switch’s performance represents “a major new step toward building a computer that uses light instead of electricity to process information.”

Relying on photons to transport data within a computer offers several advantages over electronic communications: photons travel faster than electrons and don’t waste energy by heating up the computer components. Direct switching also removes the need for on-chip optical fiber links, which occupy too much room to be useful for carrying data across a computer chip.

The new switch combines nanometer-scale gold and silicon optical, electrical and mechanical components, all densely packed, to channel light into and out of a miniature racetrack, alter its speed, and change its direction of travel. The NIST-led international team describes the device in today's issue (November 14th) of the journal Science.

The device has myriad applications, notes study co-author Christian Haffner of NIST, ETH Zurich and the University of Maryland. “In driverless cars, the switch could rapidly redirect a single light beam that must continually scan all parts of the roadway to measure the distance to other automobiles and pedestrians,” he said.

“The device could also make it easier to use more powerful light-based circuits instead of electricity-based ones in neural networks. These are artificial intelligence systems that simulate how neurons in the human brain make decisions about such complex tasks as pattern recognition and risk management.”

Potential LIDAR replacement system: In driverless cars, for example, the NIST switch could rapidly redirect a single light beam to scan all parts of the roadway.

Haffner and his colleagues, who include Vladimir Aksyuk and Henri Lezec of NIST, say their findings may come as a surprise to many in the scientific community because the results contradict long-held beliefs. Some researchers have thought that opto-electro-mechanical switches would not be practical because they would be bulky, operate too slowly and require voltages too high for the components of a computer chip to tolerate.

The switch has one other crucial component: a thin gold membrane suspended just a few tens of nanometers above the silicon disk. Some of the light traveling in the silicon waveguide leaks out and strikes the membrane, inducing groups of electrons on the membrane’s surface to oscillate.

These oscillations, known as plasmons, are a kind of hybrid between a light wave and an electron wave: The oscillating electrons resemble the incoming light wave in that they vibrate at the same frequency, but they have a much shorter wavelength. The shorter wavelength lets researchers manipulate the plasmons over nanoscale distances, much shorter than the length of the original light wave, before converting the oscillations back into light. This, in turn, allows the optical switch to remain extremely compact.

Scientists had once thought that a plasmonic system would greatly attenuate light signals because photons would penetrate the interior of the gold membrane, where electrons would absorb much of the light energy. But the researchers have now proved that assumption wrong. The compactness of the device and a design that ensured that few photons would penetrate the membrane resulted in a loss of just 2.5% of the light signal, compared with 60% with previous switches. That puts the switch, although still a prototype, within reach of commercial applications.

The team is now working to make the device even smaller by shortening the distance between the silicon disk and the gold membrane. This would further reduce signal loss, making the technology more attractive to industry.