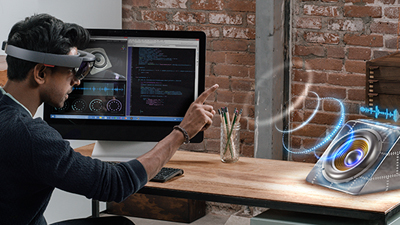 Heads up: Microsoft's Hololens is an important AR tech in the XR market.

Europe will account for a quarter of the global augmented, virtual and mixed reality marketplace (collectively “XR”) by 2023, 40% more than North America. So says a new market analysis by Digi-Capital, a Silicon Valley-based XR adviser. Its 2019 Augmented/Virtual Reality Report, which will be presented at next week’s AWE EU conference, in Munich, Germany, also reveals that Germany, UK, France, Italy and Russia will lead the way for XR in Europe.

Tim Merel, Managing Director of Digi-Capital, commented, “While Asia could dominate XR over the next five years, Europe might drive significantly more of the rest of the global augmented reality market and virtual reality market than North America in the same timeframe.

He added, “Despite the early stage XR market having a way to go before it truly scales, in the long run companies from Silicon Valley to Shanghai could find significant users and revenue in the spatial computing markets of Europe.’

The report will claim that the largest single country markets for XR outside Europe “could be China, USA, Japan, South Korea and India by 2023, with Russia, Germany, UK, France and Italy leading the charge for Europe.” Digi-Capital added that while those five countries could drive around three quarters of European spatial computing revenue, the long tail of other European countries could each contribute a significant amount to growth in the region. 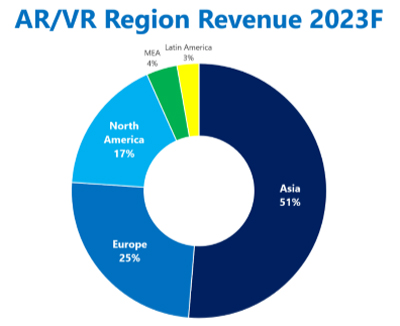 Largest markets beyond Europe could be China, USA, Japan, South Korea and India.

Grouping all countries by region, the analyst argues that Asia could have 51% of the global XR market by 2023. In spite of Silicon Valley being the source of many innovations across spatial computing, long term European revenue could account for 25% of the global XR market with 17% coming from North America. So, while the USA is the second largest single country market after China, North America as a whole might become the third largest region in the world for AR/VR after Europe.

Merel added, “In terms of installed base, AR’s geographic distribution is broadly similar to smartphone distribution, and VR’s distribution is roughly similar to the games market. So, it is not surprising that the key XR economic drivers of hardware sales, eCommerce sales, ad spend, enterprise software/services, in-app purchases, premium app sales, location based entertainment and video could end up along similar regional lines to those markets in the long run. Number of users and unit economics tend to dominate how money flows globally.

“In that context the long term potential of XR in Europe is helped by both its large consumer population and a long history of industrial innovation, particularly in the German-speaking region of Europe.”

Merel will be discussing this and more in his presentation at AWE EU in Munich, alongside speakers from Snap, Facebook, Google, Microsoft, Magic Leap, Coca-Cola, HTC Vive, and others.