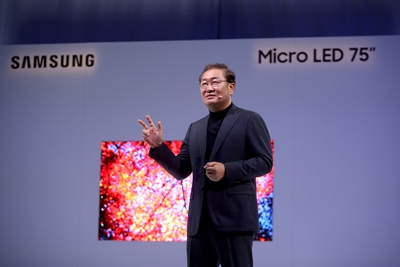 Attendees at the Consumer Electronics Show (CES) in Las Vegas can witness a variety of new photonics-based gadgets at this year’s event – among them new TVs, wearable sensors, and numerous innovations aimed at the automotive industry.

Highlights this time around include the emergence of modular “micro LED” TV displays, thanks to developments at the Korean consumer goods giant Samsung.

Having unveiled the format at last year’s CES in the form of a giant “wall” display, Samsung has now shown off a 75-inch TV capable of 4K resolution – thanks to advances in pitch resolution that has shrunk the distance between each of the millions of tiny emitters that make up the screen.

‘Infinity pool’ effect
Unlike conventional LCD TVs, no backlight is required, making the micro LED approach more similar to organic LED (OLED) displays in some respects. However, Samsung cites advantages including the ability to easily build displays from modular square tiles, to create any shape or aspect ratio desired.

The micro LED approach also does away with any need for a bezel, creating what Samsung describes as an “infinity pool” effect with no borders between tiles or around the external edge of the screen.

Other benefits ought to include a longer lifespan than OLED displays and more effective reproduction of black colors because individual emitters can be switched off completely.

“These transformative TV displays are made up of individual modules of self-emissive micro LEDs, featuring millions of inorganic red, green and blue microscopic LED chips that emit their own light to produce brilliant colors on screen – delivering unmatched picture quality that surpasses any display technology currently available on the market.”

The micro LED approach has emerged as a potential threat to OLED and quantum-dot-enhanced displays in recent years, although no commercial products based on the technology are yet available.

Plessey and Nanoco
Among the other companies in the displays supply chain working on micro LEDs are Nanoco Technologies, which specializes in cadmium-free quantum dots (CFQDs), and Plessey Semiconductors.

The two UK companies have just revealed details of a collaboration aiming to shrink the pixel size of micro LEDs by close to an order of magnitude – something that could produce high-resolution displays suited to close-to-eye applications like augmented and virtual reality (AR/VR) glasses.

“Using its existing monolithic process, Plessey will integrate the Nanoco quantum dots into selected regions of blue LED wafers to add red and green light,” announced the two companies. “This shrinks the smallest practical pixel size from today’s 30 µm to just 4 µm, a reduction of 87 per cent.”

They claim that using micro LEDs in place of OLEDs in AR/VR goggles or head-up displays would offer a ten-fold improvement in resolution, alongside 100 times the contrast ratio, and 1000 times the luminance.

“They do so at half the power consumption, doubling battery life in portable devices,” added Plessey, which is also showcasing its offering at the CES event. “They also feature perfect blacks, realistic color, and immunity to burn-in or decay over time.”

Lasers for headlamps and car LiFi
Elsewhere at CES, another company specializing in gallium nitride (GaN) optoelectronics is launching a new range of lasers that are targeted at both headlamps and future in-car communications, in the form of “LiFi” connectivity.

Co-founded by 2014 Nobel laureate and blue laser diode pioneer Shuji Nakamura, California-based SLD Laser says it is “poised to revolutionize” the automotive and lighting industry with its high-brightness sources.

“SLD’s LaserLight will hit the streets next year for the first time with the arrival of select premium car models deploying the company’s LaserLight Fiber for high-beam boost functionality, complemented by a conventional LED unit for low-beam,” says the firm. “This signals SLD Laser’s production launch in the automotive category, with units shipping now for cars to be delivered to customers in Europe in Q3 2019.”

Further into the future, SLD reckons the same technology will migrate into new lighting functions for autonomous driving, thanks to a millimeter-scale mirror based on MEMS technology used to steer the light to the road.

“For connected cars, LaserLight sources will enable LiFi data communications,” it adds, suggesting that with data transmission rates in excess of 5 Gb/s the high-speed approach will eclipse the capabilities of conventional WiFi communications.