Shareholders now persuaded of the benefits of Finisar deal, says the company. 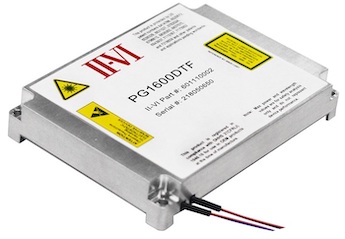 Quarterly revenues rose to $343 million from $314 million in the preceding quarter, and from $281 million for the same period of fiscal 2018, a year-on-year increase of 22 percent.

Net earnings also rose, from $26.1 million in Q1 to $28.7 million for Q2. Half-yearly cash flow from operations grew 48 percent from that recorded in the first half of fiscal year 2018, according to CEO Chuck Mattera.

Compared to Q2 of last year, revenues from the communications market grew 45 percent, with Mattera singling out the deployment of reconfigurable optical add-drop multiplexers (ROADMs) in China as being a particular contributing factor.

NASDAQ traders liked the numbers, and II-VI shares were up by over 15 percent after the announcement.

Discussing the results with analysts, Mattera gave an update on the forthcoming acquisition of Finisar, a deal agreed in November 2018 with a $3.2 billion price-tag that is set to create one of the world's largest photonics companies.

All required filings and regulatory applications connected with the deal have now been completed, and competition regulators in the US and Germany have cleared the transaction.

"We believe that the Finisar monolithic indium phosphide-based optoelectronic devices and laser platform, along with large scale design and automated manufacturing capabilities, will allow the creation of new applications in markets and form the basis of a scalable platform to enable our growth," said Mattera.

"For example, the combination of two of our product platforms, the II-VI fiber amplifier and Finisar’s indium phosphide-based transceiver, will enable the cost-effective adoption of LIDAR by innovators in autonomous driving markets."

The news of a Finisar deal in November was met with a lukewarm response from the markets, along with a 20 percent drop in share price at the time. CFO Mary Jane Raymond commented that there was now "an increasingly good understanding from the shareholders that this is a very, very good combination."

The strength of the market in China was also a topic of discussion, given the volatility in that territory and the generally weaker data points seen by several industrial suppliers.

II-VI's markets in China involve both fiber-laser and direct-laser customers, and a number of diversified applications, but the company has said that it expects its China business will continue to grow. "We remain watchful about China because there are aspects of that economy that are less easy to predict than others," commented Raymond.

Asked about II-VI's business with Huawei, the China telecom giant that has run into trouble with US lawmakers, CTO Giovanni Barbarossa - also president of the company's Laser Solutions segment - commented that developments with Huawei would not meaningfully impact overall market demand for II-VI products.