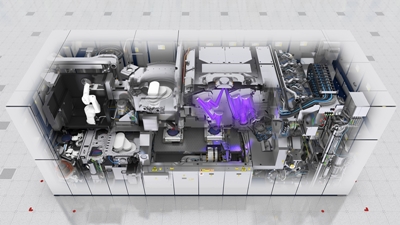 ASML says that it is expecting to post another year of record sales in 2019 – despite what CEO Peter Wennink called “undeniable” concerns and weaknesses in the global economy.

The Netherlands-headquartered lithography equipment firm, whose systems are based around state-of-the-art lasers and optical components, has just posted sales of €10.9 billion for 2018, almost hitting its €11 billion target for 2020 a year early.

And while 2019 is expected to get off to a much slower start, demand for new logic chips in particular should see the company post another annual increase in sales thanks to a much stronger second half of the year.

EUV confidence
Wennink warned that a combination of factors would weigh on the opening period of 2019. Having posted sales of €3.1 billion for the closing quarter of 2018, that figure will drop to €2.1 billion in the current quarter.

That is partly because of some customer push-outs into the second half of 2019, but also reflects some shipments that were pulled into 2018, and the impact of a serious fire at electronic component supplier Prodrive in December. Wennink indicated that ASML had effectively lost a quarter’s worth of inventory as a result, although that will be replenished in due course.

The CEO remains very positive on the prospects for EUV lithography equipment, noting that each of ASML’s key customers has a plan to ramp the technology to high volumes in the near future.

Samsung said back in October that it had started EUV-based production for chips manufactured with its new 7 nm process “node”, and Wennink said he expected the first products and systems featuring EUV-patterned transistors to appear in commercial products in the second half of 2019.

“Our biggest achievement in 2018 was not financial,” reflected the CEO, despite the record-breaking sales figure and high profit margins. “It was the technological breakthroughs.”

In terms of EUV development specifically, Wennink highlighted that the company’s laser-driven sources are now capable of generating more than 250 W of EUV power. While EUV systems now in the field are now able to pattern 145 wafers per hour (wph) – beyond the 125 wph benchmark specified for economic production – the forthcoming “NXE:3400C” system will push that productivity beyond 170 wph.

“During Q4, we received five EUV orders,” added the CEO. “We have customer demand for 30 EUV systems in 2019 and these shipments will include the first volume production systems to DRAM memory customers.”

Geopolitical tension
Turning to macroeconomics, Wennink said that the combination of geopolitical tension, the slowing Chinese economy, and the unpredictable impact of the UK’s withdrawal from the European Union would inevitably have some impact on ASML’s prospects in the coming year.

Despite that, strong demand from makers of logic chips in particular means that ASML is confident of hitting its future sales targets, and is ramping up its research and development spending with an eye on future generations of EUV tools featuring high-numerical-aperture (NA) optics to further shrink feature sizes.

ASML and its key optics partner Carl Zeiss have also reached a settlement with Japanese rival Nikon, over a patent dispute relating to immersion lithography and digital camera technology.

Nikon initiated a series of lawsuits in April 2018, after the parties involved failed to agree on the terms of an extension to a long-standing cross-license agreement. ASML and Zeiss responded with their own counter-claims, and now the three firms have agreed a settlement via a memorandum of understanding.

Under the terms of that deal, ASML and Zeiss are set to pay Nikon €150 million, as well as a royalty of 0.8 per cent on sales of immersion lithography systems for ten years – once the agreement is formally signed off.