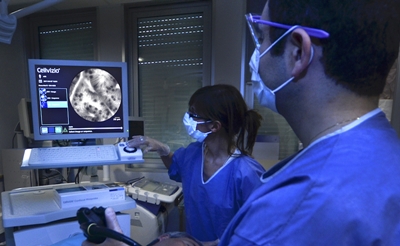 Mauna Kea Technologies, the French developer of confocal laser endomicroscope technology for earlier diagnosis of cancer and other conditions, has reported a sharp increase in year-on-year sales in the final quarter of 2018.

And although annual sales in 2018 ended up virtually identical to the 2017 figure of €6.7 million, the Paris-listed firm says that it is now benefiting from the switch to a pay-per-use business model and a focus on clinical applications.

CEO Robert Gershon, who stepped into the lead executive role late last year, said in a company statement: “We are encouraged by Q4 performance and the momentum created leading into 2019. Our fourth quarter sales growth reflects the continued progress we are making in transitioning our business model and focusing our commercial efforts in high-growth procedure categories in the US market.”

Shipments soar
At €2.1 million, total Q4 sales were up 37 per cent on the same period in 2017, with Gershon pointing out that system shipments had more than tripled – from 9 unit to 28 - at the same time.

He attributed the increased adoption of the company’s “Cellvizio” equipment to customers who see the value in Mauna Kea’s pay-per-use program. “System placements in this program represented [a] 323 per cent increase over 2017,” the CEO said. “Most importantly, these placements are driving solid growth in sales of consumables - the key indicator of recurring revenue - which increased 17 per cent year-over-year in total.”

The traction generated by the jump in system sales was also reflected in the full-year figures, with Mauna Kea shipping 81 units, up from 43 in 2017.

At the same time, sales of the consumable probes that are used in conjunction with the Cellvizio equipment increased 9 per cent, to 663 units. Exactly what impact the additional system shipments will have had on Mauna Kea’s profit and loss account remains to be seen, as the company is yet to report complete financial figures for the closing quarter of 2018 and the full year.

Gastro-intestinal focus
The shipment figures also showed that sales to clinical applications were up very sharply on the year-ago figure, doubling in the important US and Canada region but down slightly in Asia and Latin America.

That fits in with Mauna Kea’s stated primary commercial focus, which is now is on gastroenterology biopsy procedures in the US. Key applications include screening for signs of pre-cancerous cells in the upper gastro-intestinal (GI) tract, where late diagnosis of esophageal cancer leads to a particularly poor prognosis.

Mauna Kea has targeted that opportunity with both the pay-per-use business model that removes the need for physicians to make an up-front capital equipment purchase, and a new US sales team.