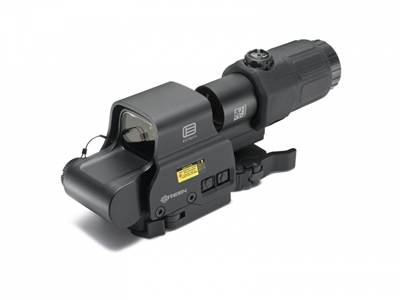 EOTech, a division of the US defense contractor L3, has won a $26.3 million contract to provide the US military with its latest holographic weapon sights.

The five-year deal with US Special Operations Command (USSOCOM), which coordinates and carries out elite-level anti-terrorism missions, will see EOTech provide its holographic weapon sight and G33 clip-on magnifier optics. The contract will be fulfilled at the company’s headquarters in Ann Arbor, Michigan.

Jeff Miller, who heads up L3’s ISR (intelligence, surveillance, and reconnaissance) systems business unit, said in a company release: “We are extremely proud to continue to provide America’s tip-of-the-spear warriors with the most advanced holographic sights in the world.

“It’s a testament to L3’s commitment to quality that USSOCOM has once again competitively selected EOTech as their choice for battle optics.”

Razor-sharp views
According to EOTech, it has been providing various elements of the US military’s special forces operations with holographic sights for nearly two decades, although this latest contract will see it deliver an updated model of the technology.

It says that the devices give an instantaneous, razor-sharp view of both reticle and target – claiming an advantage over tubular red-dot scopes that are said to amplify “tunnel vision” under the kind of duress encountered in combat.

“With [our holographic weapon sights], the holographic reticle is perceived by the shooter to be as far away as the target, allowing focus on both the target and the reticle,” it adds. “The focus is on the target, versus shifting back-and-forth from near to far, reticle to target.”

Another advantage over so-called red-dot sights is that the EOTech holographic alternatives use a non-reflective window, without any mirrored or metal-coated surfaces that might give away a position.

The devices can also be equipped with a night-vision capability that is said to be undetectable by enemy surveillance systems.