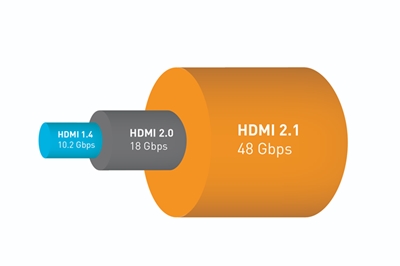 Silicon Line, a company that produces optical modules for active cables used in high-speed data connectivity applications, has unveiled what it claims to be the first version of the technology supporting the new HDMI 2.1 specification.

The Munich, Germany, firm was due to showcase the technology at this week’s Consumer Electronics Show (CES) in Las Vegas, in a demonstration with new HDMI 2.1-enabled 4K and 8K resolution TVs.

The latest iteration of the HDMI standard is designed for future increases in bandwidth to deliver the rapidly rising data transfer speeds needed in TVs featuring “ultra-HD” resolution and ever-faster frame-rates.

HDMI 2.1 will be able to support TVs with resolution of 10K and a refresh rate of 120 frames per second – even though no such TVs yet exist as commercial products. However, the emergence of 8K TVs and features like cinema-quality audio for home theaters is placing greater demand on current links.

Pointing out the limitations of copper cabling, he added: “Our embedded technology supports all the advanced new features of the HDMI 2.1 specification and will allow the production of thin, long, flexible optical HDMI cables at prices affordable to consumers.”

Silicon Line is currently awaiting the release of the full HDMI 2.1 specifications before finalizing the components it will provide to manufacturers of ultra-high-speed HDMI cables for use with HDMI 2.1-enabled products.

HDMI 2.1 will not require active optics as standard, but the limitations of copper cabling when carrying high bandwidths over distance means that the longer the length of cable required, the more likely it is that optical links would be used. In such cases, each active cable would require two optical modules, one at each end.

Belgium ramp
The HDMI Forum trade association, of which Silicon Line is a member, announced initial details of the HDMI 2.1 specifications in November 2017. The backwards-compatible format will support bandwidths of up to 48 Gb/s, up from 18 Gb/s in the current HDMI 2.0 standard.

The company claims that its optoelectronics and manufacturing expertise has reduced the production cost of active optical cables dramatically, making them suitable for applications including HDMI, DisplayPort and USB3.

Last September the company announced a series B funding round of €8.2 million intended to ramp production of the optical modules used inside the various high-bandwidth cables.

And Silicon Line now says that it will double production capacity at its factory in Belgium, where the “optical engines” are made. “The expansion, within [our] existing facility, is already under way and will be completed during the first quarter of the year,” announced the firm. “Employment at the factory will increase 30 per cent.”

“We will be able to produce optical engines and cable modules to make millions of cables annually,” added van der Linden. “The company may look to expand factory capacity again next year as demand and consumer applications for high-bandwidth cables continues to grow.”

As well as the expected applications in consumer electronics, Silicon Line says it will look to target industrial and commercial applications, with customized cable modules.