With its share price close to an all-time high, the UK-based optics company is raising cash to acquire fiber-optic component vendor EM4. 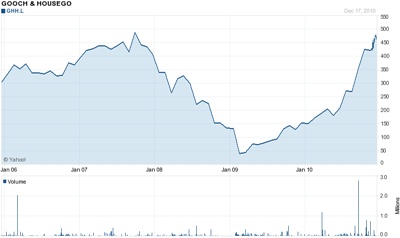 Precision optical component and subsystem manufacturer Gooch & Housego is to raise £10.6 million ($16.4 million) on the London Stock Exchange in a bid to purchase the Boston, Massachusetts, company EM4.

EM4 produces active photonic components and fiber-optic systems, and specializes in high-performance, ruggedized components that are typically used in aerospace and satellite applications. Gooch & Housego, which is based in Somerset, UK, is expecting the acquisition to cost an initial consideration of up to $12 million, with a further potential performance-based earn-out of $7 million.

Julian Blogh, the non-executive chairman at Gooch & Housego, said that the proposed deal was in line with the company’s strategy of market diversification:

“The acquisition of EM4 will enable Gooch & Housego to move further towards a fully integrated service platform offering both active and passive fiber-optic technology, and enhance our penetration of the US aerospace and defense market,” Blogh said. “Gooch & Housego has a good track record of successfully integrating businesses into the group, and I am confident that EM4 will fit in well.”

To finance the acquisition, the UK company is placing nearly 2.4 million new ordinary shares on the stock market at a price of 450 pence each, and taking advantage of a share price that has reached close to record highs in recent weeks after climbing sharply for much of the past two years.

Those new shares are expected to begin trading on the London exchange on January 6, with the EM4 acquisition likely to be completed by the end of January.

Diversification strategy
The deal is very much in line with the sentiment expressed by Gooch & Housego in its most recent financial results announcement in late November. At the time, the company had said that it wanted to migrate from being largely a component-level company to become a supplier of photonic modules and sub-assemblies. Through the EM4 acquisition, it will gain access to both active and passive components – crucial to the implementation of that strategy.

Gooch & Housego will be acquiring EM4 from management shareholders and a consortium of venture capital firms including Baker Communications, Rustic Canyon Ventures and Swedestart Tech. Back in 2003, Baker Communications had led an $8 million Series B round of financing in the company, as it diversified from its original focus of the optical communications market and towards aerospace, life science and industrial applications of fiber-optic technology.

The initial cost of the acquisition, assuming that it goes ahead as planned, will be six times EM4’s earnings before interest, tax, depreciation and amortization (EBITDA) figure for the year ending December 31, 2010. In the first ten months of the year, EM4 made EBITDA of $1.1 million on revenues of $6.5 million, swinging to a profit after a much-improved performance on 2009, when it made an annual EBITDA loss of $1.4 million.

That initial payment - though capped at $12 million - is expected to be about $10 million, while an earn-out clause in the deal based on EM4's financial performance in 2011 means that Gooch & Housego may have to pay an extra $7 million in cash. In all, EM4’s current owners stand to receive a maximum of $19 million in the transaction.

In the event that the deal does not go ahead as envisaged, Gooch & Housego says that it will instead use the net proceeds of its share issue to reduce its bank debt.