Transitioning markets and a sharp increase in the number of large-scale projects will see the CdTe solar panel maker ship 2GW next year. 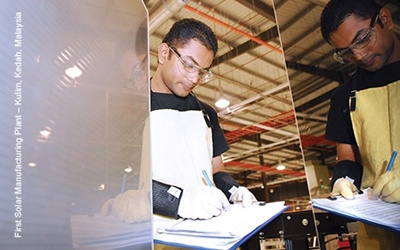 The development of emerging markets for solar power and a step change in the build-out of utility-scale projects will see First Solar ship around 2 GW worth of photovoltaic products in 2011.

That should translate to around $3.8 billion in net sales, equivalent to a 46% increase on the company’s own forecast for 2010 revenues, indicating both the continued strong momentum in the sector and First’s investment in additional manufacturing capacity. Around three-quarters of the 2011 revenue is expected to result from module sales, with the remainder relating to complete solar projects.

CEO Rob Gillette said that the company would now be focusing more on what it describes as “transition” markets, where demand is starting to take off – such as the US, China and Australia. In the US in particular, a number of utility-scale projects are in progress, and Gillette says that these installations will be a key part of the 2011 solar story.

First Solar recently completed a 48 MW facility in Copper Mountain, Nevada, for the Pacific Gas & Electric (PG&E) utility company. In 2011, several projects rated at more than 100 MW will be under construction. And now the company has sold the Agua Caliente project in Arizona, which at 290 MW is likely to be the largest PV plant in the world when it is completed in 2014.

PG&E is also a key partner for the AV Solar Ranch One project in California, which First Solar acquired through its purchase of NextLight earlier this year, while four even larger Californian projects are currently in development.

Capacity expansion
First Solar will be investing around $1 billion in capital expenditure during 2011 to meet the expected future demand, mostly to expand its existing capacity of 24 production lines to 46. That expansion is now all set to go ahead in Ho Chi Minh City, Vietnam, but a question mark hangs over plans that the company has to build a production facility in France.

That’s because the French government has temporarily suspended its photovoltaic feed-in tariff support, with no indications as yet of when the tariff might be re-introduced. The French authorities are worried that their generous tariff could create an investment bubble similar to that seen in Spain in 2008.

Consultation with representatives of the PV industry in France to find a solution is due to begin imminently, but, not surprisingly, the Association Professionnelle de l’Energie Solaire reacted badly to the government’s decision, saying that it would jeopardize the 20,000 jobs created by the sector in France within the past two years. First Solar says that it wants to resolve the situation with the French government, but that without a local feed-in tariff the facility – due to open in 2012 with a capacity of 119 MW - would not be built, and equipment that had been ordered would instead be installed in its other facilities.

The $1 billion capital expenditure that First Solar has earmarked for 2011 will increase its total production capacity from 1.43 GW in 2010 to around 2.1 GW next year and 2.7 GW in 2012. The 2011 expansion will be focused on its existing facilities in Germany and Malaysia, with the new operations in Vietnam and France, plus another in the US, set to come on line in 2012.

With the global PV market set to diversify significantly in 2011, and become far less reliant on German installations, CEO Gillette suggested a consensus forecast of 15.1 GW of installations in 2011 – up from an expected 13.5 GW in 2010. First Solar’s own business will reflect that geographical shift: Gillette said that Germany accounted for about 45% of the company’s revenues in 2010, but expects that proportion to decline to between 25% and 30% in 2011.