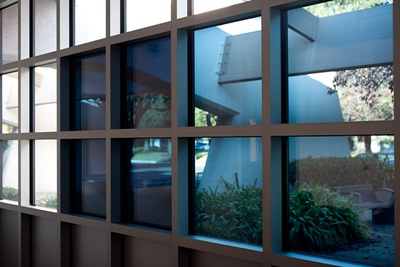 California-based Soladigm, a company that is developing “smart” windows that improve energy efficiency by control of their optical transmission, has secured $30 million in Series C equity financing.

The latest round was led by DBL Investors and NanoDimension, but also included GE’s Energy Financial Services unit and previous investors Khosla Ventures and Sigma Partners.

The windows that Soladigm is developing are based on electrochromic technology, where a thin-film coating enables the window to change tint when a small voltage is applied.

The reversible change in optical properties is due to insertion or removal of ions within the electrochromic material, and enables instantaneous electrical control of light transmission, heat and glare.

Fabrication methods
Founded in 2007, Soladigm has been assigned a number of patents covering electrochromic technology. The most recent, US patent 7,808,693, was granted in October 2010. It describes a wide range of elelctrochromic materials, and various methods that could be used to deposit thin films up to 300 nm in thickness, including pulsed laser deposition and sol-gel techniques.

In other patents, the company describes thin films based on a combination of metal and chalcogen elements, and electrochromic devices incorporating a Fabry-Perot resonant cavity.

Whatever the precise nature of the windows, according to Soladigm commercial buildings featuring the technology could cut their energy consumption by some 25%, and reduce peak loads by 30%.

Rao Mulpuri, the Soladigm CEO, said after the latest venture backing: “Soladigm is on a mission to bring high-quality dynamic glass to the market at affordable prices to drive widespread market adoption and reduce energy consumption in buildings.”

In addition to its funding, GE has also endorsed the technology through its $200 million “ecomagination challenge” program, through which it has selected 12 businesses for investment and commercial partnerships. Its aim is to get entrepreneurs, innovators and students to share ideas on how to build what it describes as the “next-generation power grid”.

Cynthia Ringo, a managing partner at DBL who has now joined the Soladigm board of directors, said of the company’s progress so far, “Soladigm has achieved a number of breakthroughs, and is quickly making dynamic glass cost-competitive and scalable.”

Earlier this year, Soladigm said that it would be investing $130 million in its manufacturing operations in Mississippi, with the creation of 300 jobs. The location is close to Memphis, the main hub for logistics and distribution in the US. The State of Mississippi provided a $40 million loan and a $4 million incentive package to help attract Soladigm.

Although the company is yet to announce any commercially available products, pre-production demonstrations of electrochromic windows in both commercial and domestic applications are said to be in the works, although the company declined to comment on the likely timing of any manufacturing ramp.