Researchers at the German company have won the 2010 Beckurts Prize for their development of direct green semiconductor emitters. 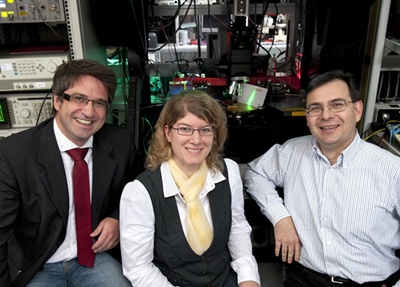 Osram Opto Semiconductors will ramp commercial production of direct-emitting green laser diodes in 2012, as the technology moves out of the laboratory. “Product development has just started, and we expect production transfer and start-up in 2012,” the German company says.

Green laser diodes are expected to find widespread future application in miniature projectors, where a high-quality image is produced by a combination of red, green and blue emitters. Early incarnations of these handheld devices instead rely on either LEDs or an RGB laser setup featuring a frequency-doubled infrared laser in place of a direct green emitter.

But according to the Osram research team that developed the direct green laser, the frequency-doubled versions have a major drawback: “This solution is very costly to assemble and drive,” they told optics.org. “A directly emitting green laser will eventually replace this laser and contribute to further miniaturization and performance enhancement of these projectors.”

The timing of that replacement will depend mostly on the ability to reduce the cost of producing the green devices, which Osram expects will be similar to that experienced with the blue laser diodes that are now manufactured at a very low cost and feature in millions of Blu-ray Disc players. 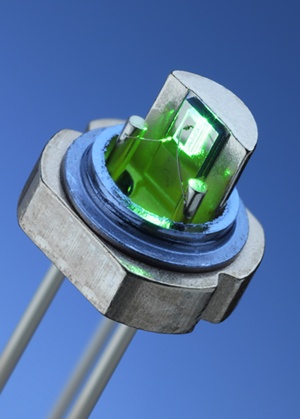 Production yields
Just as with blue lasers, the high initial costs relate largely to low device production yields. But because the direct green emitters will be smaller, easier to control, more efficient and can be modulated faster than the frequency-doubled versions, Osram expects them to find favor before long. “There is much less potential for cost reduction with a frequency-doubled laser, because of the complexity,” said the company.

One of the toughest challenges with the gallium nitride (GaN) semiconductor material system used by Osram is to push the emitting wavelength of the laser into the “true green” part of the visible spectrum. So far, its best performance has been 50 mW laser diodes operating at 524 nm. Although this isn’t quite in the center of the green region, Osram says that using a 520 nm emitter in conjunction with a red and blue laser delivers the widest range of different colors.

The Osram lasers were developed through the MOLAS project, which was supported by the German Federal Ministry of Education and Research. Key researchers Désirée Queren, Stephan Lutgen and Adrian Avramescu have just received the 2010 Beckurts Prize, awarded each year by the Karl Heinz Beckurts Foundation to industrial innovations in Germany, for their work on the devices.

They say that the lasers will find many other applications, aside from their expected high-volume use in handheld projectors, for example in spectroscopy and levelling.

One of the key challenges for any of the companies working with GaN material will be to reduce the threshold current of their lasers, so that power consumption can be kept to a minimum. Other material systems are able to offer lower threshold values, although they are at a much earlier stage of development than the Osram and Nichia versions.