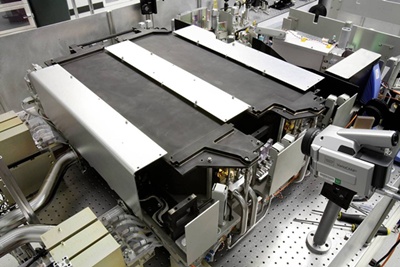 Northrop Grumman’s Joint High Power Solid-State Laser (JHPSSL), a 100 kW system being developed for US military use, has now operated above the rated power level for six hours, claims the company.

The system, designed to be a far more convenient form of laser weapon than chemical laser alternatives that can deliver huge amounts of power but which are not suited to the logistics of the battlefield, is being refined in advance of a move from NG’s factory in Redondo Beach to the US Army’s White Sands Missile Range in New Mexico.

The level of power required for a military system presents a very tough test for the laser diodes that sit at the heart of the JHPSSL. Even the most efficient diodes in the world still convert more electrical energy into heat than they do into light. And when thousands of them are required to deliver the necessary power, heat removal becomes a major issue:

“We don’t know of another 100 kW solid-state laser anywhere that has operated continuously for more than a few seconds,” noted VP of advanced concepts Steve Hixson from NG. “That kind of performance is unparalleled in the world of high-energy lasers.”

Optical damage
As Jeff Hecht noted in a blog post for New Scientist, optical damage is another of the chief concerns when such high powers are employed, and lots more work on optical components that can withstand the assault will be needed before such a laser system can be used reliably on a 24/7 basis in a battlefield environment.

The US military has spent heavily on the development of laser weapons, perhaps most notably in the form of the Airborne Laser, an adapted Boeing 747 featuring a chemical laser. However, the Airborne Laser has suffered a number of setbacks recently – in October the Missile Defense Agency (MDA) said that high-energy lasing failed to occur despite successful tracking of a rocket’s exhaust plume. In August and September, two other test firings were cancelled due to cooling issues and unsuccessful tracking.

Mark Neice, director of the High Energy Laser Joint Technology Office with the Office of the Secretary of Defense, said of NG’s six-hour achievement: “Not only did the company demonstrate the full set of performance qualities required for a solid-state laser weapon, but its achievements during the last 18 months remained unmatched in the community.”

As well as preparing the JHPSSL for its move to the test facility at White Sands, NG is also looking at ways in which it can be integrated with a pointer-tracker system for use in a mobile, ground-based weapon.

Of the various companies working on solid-state laser weapons, NG's rival Raytheon announced at the Farnborough Air Show in July that it had developed a 32 kW system based on six fiber laser sources. That system had been used to shoot down four unmanned aerial vehicles (UAVs).