Optical method could be used to diagnose early-stage lung cancers with US company's novel approach to coherence tomography. 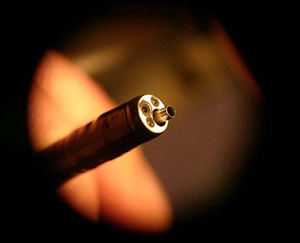 Tomophase, a Burlington, Massachusetts company developing "OCTIS", a novel imaging system based on optical coherence tomography (OCT), has received clearance from the Food & Drug Administration (FDA) to market the system in the US.

The company is working in particular on the diagnosis of pulmonary diseases using the optical technique, and the OCTIS system employs a disposable optical catheter to image airways and lung tissue.

Ralph Johnston, the president and COO of Tomophase, says of the potential applications: “Our company is committed to providing new medical imaging products to improve the diagnosis and treatment of diseases of the lung and airways including asthma, emphysema and lung cancer.”

Johnston and colleagues say that a recent large-scale clinical trial in the US gave an indication of how OCTIS might be used in the future. In the National Lung Screening Trial (NLST) of more than 50,000 former smokers, the risk of dying from lung cancer was reduced by 20% when the subjects were given low-dose CT scans to identify lethal tumors at an earlier, more treatable stage. “Tomophase OCTIS has the potential to monitor these patients by imaging pulmonary tissue following a CT scan using laser light rather than radiation,” the company says.

Intellectual property
Just a month ago, Tomophase was awarded a US patent covering the application of its technology for detecting, diagnosing and treating diseases in lungs and other organs. Patent number 7,831,298 describes a way to image oxygenated and de-oxygenated blood in the lung tissues using two wavelength bands – one at 650-800 nm and the other at 850-1000 nm.

That is one of eight US patents held by Tomophase, which has also protected its phase contrast tomography (PCT) and spectral absorbance tomography (SAT) techniques in patents 6,903,820 and 7,259,851 respectively.

With 510(k) clearance for OCTIS now received, the company’s next key milestone is to deliver a pre-clinical study system, which should be followed within a year with the completion of an initial pre-clinical study.

Among the diseases that Tomophase is targeting, asthma is believed to affect some 14.5 million adults in the US today, while lung cancer is the leading cause of cancer death globally. As with many cancers, if detected at an early stage the prognosis for patients is pretty good – around 85% of lung cancer patients survive for five years or more when the disease is picked up early. But if a patient is already presenting physical symptoms of the disease, that survival figure drops to just 10-15%.

However, differentiating between malignant and benign tissue in pulmonary nodules has historically been very difficult, while taking conventional pulmonary biopsies carries a significant risk in itself.

OCT, effectively an optical biopsy method, can offer better resolution (2-3 microns) and more detail in real time than either conventional CT or ultrasound imaging, says Tomophase, adding that the technique has been shown to differentiate between malignant and benign tissues in pulmonary nodules.

Tomophase was founded in 2003 and closed a $4.5 million round of Series A financing in December 2005, led by Sanderling Biomedical Venture Capital. Ralph Johnston joined the company from pharmaceuticals giant Pfizer earlier this year.