European Commissioner Neelie Kroes will make a keynote address at the annual meeting of the Photonics21 European Technology Platform. 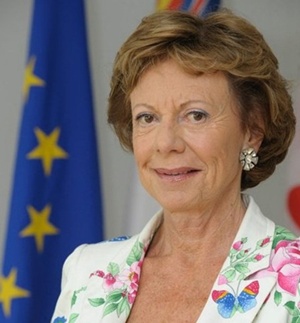 Registrations for the next annual meeting of the Photonics21 group, which takes place in Brussels on February 23-24 and features a keynote address from European Commission (EC) vice president Neelie Kroes, are now open. The meeting will focus on the priorities of the European Union’s forthcoming Eighth Framework Programme (FP8) of research.

Kroes, who is also the EC’s Digital Agenda commissioner, will set the stage on expectations for the FP8 and the major objectives of European research and innovation programs. According to Photonics21, the agenda for the event will emphasize European photonics as a key enabling technology (KET) to help meet major challenges including an ageing society, energy efficiency and security. Also at the Brussels event, EC director Thierry van der Pyl will speak about upcoming programs and funding schemes.

Photonics is already officially recognized as a key enabling technology in Europe, something that is widely viewed to have resulted in additional funding for photonics projects within the current FP7 efforts. Speaking at the recent Photonex event in Telford, UK, Photonics21 executive board member Mike Wale said that establishing photonics as one of only five official KETs had helped deliver an extra 50% for photonics research in FP7, compared with FP6. He added that there is a major opportunity to continue that trend in FP8.

Single voice
The Photonics21 organization comprises more than 1600 members representing industrial, research and political interests across the continent. Bringing many of the disparate elements of the photonics community under a single umbrella, Photonics21 has enabled the industry to speak with a single, powerful voice at the political level – something that was not the case prior to its establishment in 2005.

As well as the key political talks at the Brussels meeting, there will be seven separate work groups, six of which are focused on a different application area where photonics plays a key enabling role, as well as an education and research strand.

Those topics will be:

Before Kroes opens the general assembly with her keynote talk on February 24, the meeting will host a networking and discussion event on the evening of February 23.

For further details about the event, and pricing and registration information, visit the event web site.

• Photonics21 estimates that Europe accounts for about 20% of the global photonics industry turnover, with close to 300,000 jobs and 5000 SMEs involved in photonics across the continent.