The French manufacturer of laser chips and other optoelectronic components is expecting a 10% increase in sales revenues next year. 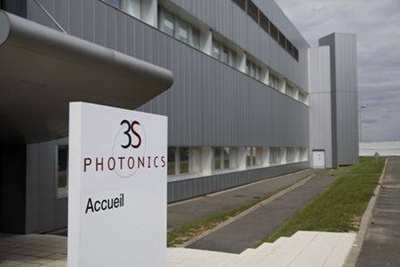 3S Photonics, the Paris-headquartered optoelectronic component manufacturer, enjoyed a 9% rise in sales revenues in its latest financial year. In the 12 months that ended June 2010, which 3S has only just issued results for, the company posted an operating revenue of €36 million and a net profit of €2.2 million.

3S claims to be the world’s leading supplier of pump lasers for submarine fiber-optic applications with a market share of some 80%, but only recently has the company been able to make any real impact in terrestrial pump applications.

According to its own figures, it has managed to win 7% of the terrestrial market in just the past couple of years, following the release of a new generation of 980 nm pump lasers based on its own in-house chip designs. When it first released those lasers in late 2007, 3S said that it expected to take a 15% market share in terrestrial pumps by the end of 2008 – equivalent to about 20,000 units.

Expansion policy
Alexandre Krivine, the French entrepreneur who acquired the 3S operation through a deal with previous owner Avanex back in April 2007, said that a recovering submarine pump laser market meant that the sales growth was likely to continue next year and also hinted at more acquisitions.

“The coming year also promises to be successful,” said the CEO. “We anticipate a growth in turnover of 10% and $70 million revenue for our consolidated group. We will also concentrate on our expansion policy and strategic partnerships in order to strengthen our international position.”

Earlier this year, 3S began that expansion effort with the acquisition of Canada-based Avensys, which makes fiber-optic components such as fiber Bragg gratings, as well as optical systems used in industrial and environmental monitoring applications. The $70 million target figure mentioned by Krivine includes the Avensys revenues as part of the 3S Photonics group.

3S Photonics’ future expansion strategy will be strengthened by the profit that it posted in the latest financial year. Operating profit jumped from only €0.11 million in 2009 to €1.98 million, enabling the company to generate a net profit of €2.2 million after gains made on foreign currency exchange were included.

As well as expanding next year, 3S will also be attempting to streamline its operations and is aiming to boost profitability by reducing operating expenses by about €1 million.

3S Photonics will be exhibiting at next month’s Photonics West trade show and conference, which will take place at the Moscone Center in San Francisco.