With revenues up 42% on 2009 and an even stronger ramp in orders, the diverse German photonics group has a new chief and is in buoyant mood. 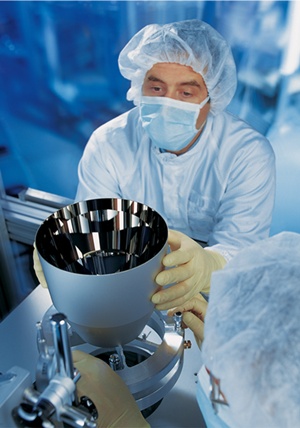 The giant German optics company Carl Zeiss Group has registered a sharp revenue increase for its fiscal year 2009-2010, thanks largely to the strength of the rebounding market for semiconductor manufacturing equipment.

The group of companies, which comprises semiconductor technology, industrial metrology, medical systems and microscopy and consumer optics divisions, reported €2.98 billion in overall sales, up 42% on the previous year. Orders have risen even more sharply during that time, and were up 52% at €3.2 billion.

Out-going CEO Dieter Kurz, who is set to be replaced by Michael Kaschke at the start of the new year, said of the recovery: “Fiscal year 2009-2010 was the most successful year ever in the company’s history. Not only were we able to equal our performance of record year 2007-2008, but we also succeeded in achieving our best-ever figures. All business groups have contributed to the good result.”

While that may be broadly true, it is clear that some business groups have contributed much more than others. At €1.19 billion, revenues from the semiconductor technology division were more than three times the magnitude of the previous year, and accounted for close to 40% of the company’s overall sales.

The division supplies the high-precision optics that are needed for state-of-the-art lithography stepper systems – equipment that has been in huge demand for most of 2010 as microelectronics companies invested heavily to upgrade their chip manufacturing capacities. Optics from Carl Zeiss are also central to the emergence of extreme ultraviolet (EUV) lithography, which is just about achieving commercial traction, following decades of laboratory development. The company supplies optics to key lithography system vendor ASML, which Zeiss says this month installed the first EUV system at a leading manufacturer.

Medical systems and microscopy
Of the other major Carl Zeiss divisions, the medical systems group contributed €754 million in sales – up 7% from the previous year – and the microscopy group posted a 9% increase to generate revenues of €397 million. The industrial metrology group was the only division to see its sales fall year-on-year, down 4% to €292 million and reflecting the impact of a delayed recovery in the automotive industry compared with the other major sectors.

Carl Zeiss’ other main segment – the consumer optics and optronics group, which sells camera lenses, binoculars and optoelectronic systems among other things – saw a slight increase in sales to €312 million, indicating the continued weakness in consumer markets.

Two months ago, Carl Zeiss also bought out the share of its spectacle lens manufacturing venture Carl Zeiss Vision that had previously been owned by the private equity group EQT. “This is the biggest single investment in the company’s history, and is a very good addition to our portfolio,” said Kurz, who expects the division, now known as the company’s “Vision Care” business, to deliver stable sales – in contrast to the highly volatile semiconductor technology division.

Overall, the Carl Zeiss Group delivered earnings before interest and tax (EBIT) of €423 million for the 2009-2010 year, compared with an EBIT loss of €67 million last year. 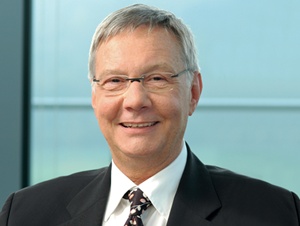 Throughout the downturn, the company decided to keep its German workforce intact, and it also maintained spending on research and development at a high level, investing €291 million in new developments during the past fiscal year. For Zeiss, the high spending is crucial, as it generates around half of its revenues from products that are less than three years old.

For next year, the company’s management is taking nothing for granted, and is assuming that market uncertainty will remain. “Nevertheless, we expect a stable development of all business groups,” said the in-coming CEO Kaschke. He is replacing Kurz who, after a full ten years as the Carl Zeiss CEO, signed off in confident mood by saying:

“The company is excellently poised for the future. Carl Zeiss has a broad, well-matched portfolio and a strong balance sheet. The business groups are expanding their leading market positions. We successfully overcame the impact of the global economic crisis, [and] Carl Zeiss is prepared for the challenges ahead.”