Fourth-quarter demand puts solar industry on course for its best-ever year, as the consulting firm increases its demand estimate by more than 1GW. 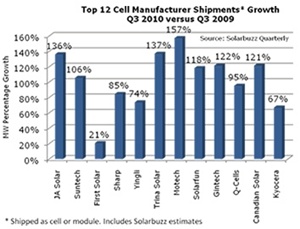 Photovoltaic industry analyst Solarbuzz says that demand for solar cells and modules is growing even faster than it had expected in the closing months of 2010, and has increased its forecast accordingly.

The San Francisco consulting firm now expects total shipment demand of 16.3 GW this year; a significant increase from its previous estimate of 15.2 GW, and more than double the 2009 consensus figure of just over 7 GW.

With cuts to incentivizing feed-in tariffs in some key markets coming up in January, the closing quarter of the year has seen the expected rush in demand, with Solarbuzz president Craig Stevens forecasting fourth-quarter shipments of 5.7 GW – up from 4.0 GW in the third quarter.

Despite the reduced support from central governments in Germany, France and the Czech Republic next year, Stevens is still expecting total market growth of 25% in 2011. The reason for that confidence is the continued expansion of other markets, in particular Italy, the US, Canada, China and smaller emerging geographies. In the US, installations are expected to double year-on-year to about 2 GW in 2011.

The global expansion will in part be driven by another sharp drop in the price of solar modules, which will be caused by excess inventory in the supply chain in the first quarter of 2011. “Wholesalers in Germany will defer purchases in the early months of 2011, until they start to see improving price offers from module suppliers,” Stevens predicted. 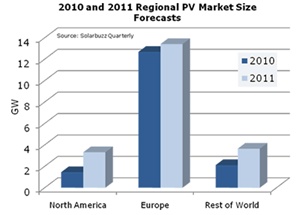 Excess supply
Because of that excess production, module prices are expected to decline by about 15% between now and the fourth quarter of 2011, Stevens says, driven largely by the fast-growing low-cost producers based in Asia.

Of the 12 leading solar cell manufacturers, seven saw their shipments more than double between Q3 2009 and Q3 2010, according to the Solarbuzz data. Taiwan-based Motech registered the most rapid growth, of 157%, while the more established First Solar showed the slowest growth of “only” 21% year-on-year.

Eight of those 12 leading cell manufacturers are based in either Taiwan or China, the exceptions being First Solar, Germany-based Q-Cells, and the Japanese companies Sharp and Kyocera. Chinese manufacturers accounted for two-thirds of global solar cell production in the third quarter of 2010, with JA Solar and Suntech leading the way.

While Europe will remain the largest market for photovoltaic products in 2011, with demand increasing only slightly to around 13 GW, the rest of the world will for the first time begin to catch up – largely because of the slow-down in the dominant German market.

Recent announcements by some of the leading cell suppliers have demonstrated widespread expectation of a growing market in 2011, despite the expected supply glut in the early part of the year. Suntech said in early December that it expected to ship in the region of 2.2 GW worth of solar products in calendar 2011 – up from 1.5 GW this year and equivalent to around 10% of the anticipated global market. The Chinese company is establishing a new joint venture company to operate a 1.2 GW capacity PV facility in Wuxi, with production due to be ramped in two 600 MW stages in 2011 and then 2012.

Back in November, JA Solar said that it had secured an additional 600 MW of orders due for shipment in 2011, citing strong momentum across the industry.