Replacing flashlamp-pumped systems with high-power diodes will both save energy and provide better welds in solar thermal collectors used to heat water. 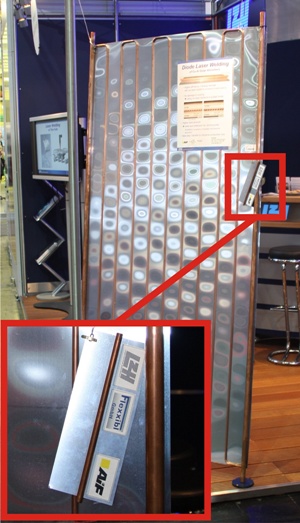 A new laser welding process under development in Germany will provide both a saving in energy consumption and improved welds in solar thermal absorber systems, according to the non-profit Laser Zentrum Hannover (LZH) center for applied laser research.

In such solar systems, which use heat from the Sun to heat up water (i.e. they are not photovoltaic), the absorbers are the key elements. They feature an aluminum sheet, which is welded to copper tubes that transport the heated water to wherever it is needed. “To weld the copper tubes to the absorber sheets, most manufacturers use two pulsed, solid-state lasers with peak energies of up to 6 kW,” says LZH.

Welding experts at LZH’s Materials and Processing Department now say that those flashlamp-driven systems could be replaced with a single 4 kW diode laser. “This laser not only has a much higher efficiency, it also uses the laser energy better, because copper and aluminum both have much higher absorption characteristics for the typical diode wavelengths used, which are 800 to 980 nm,” says the team.

A further advantage is that the size of the welding spots can be increased, they add: “Wider welding spots mean wider higher weld stability.”

The project is part of a co-operative effort between LZH and the metalworking company Flexxibl, based in Brunswick, Germany. The project partners highlighted their work at the recent EuroBlech materials processing show, and are now advancing a new laser processing head specifically designed for welding solar absorbers. The new system is expected to be ready for commercial sale by spring of next year.

Under the leadership of the LZH and the Bavarian Laser Center (BLZ), the network is aiming to modernize manufacturing in Russia with the help of laser technology and know-how from Germany.

In return, German enterprises are hoping to gain easier access to the growing Russian market for high-tech manufacturing. The five laser centers involved in the network use laser equipment from leading German companies including Trumpf, LIMO Lissotschenko, Rofin-Sinar, Jenoptik and Maschinenfabrik Arnold.

Depending on the available equipment, each site within the network will specialize in certain areas of laser technology, for example cutting and welding of metals, plastics or other non-metal materials, or on surface treatment.

For example, the Southern Laser Innovative Technology Center (SLITC) in Taganrog is located near one of the important centers of the Russian aerospace industry. Obninsk, on the other hand, site of the Kaluga Laser Innovative Technology Center, is close to the automotive industry. These two new innovation centers join centers already established in Moscow, Saint Petersburg and Jekaterinburg.