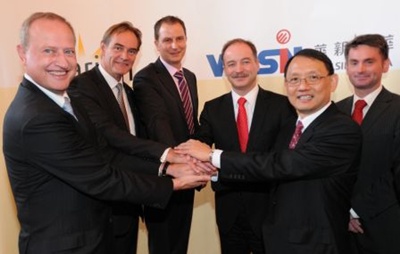 Shaking on the deal

The facility will integrate both cell and module production, with an anticipated annual output of 20 MW. It is expected to provide 140 jobs in Leipzig, and is the result of a total investment of more than €60 million provided by a combination of private equity funding from Taiwan and public backing via the Development Bank of Saxony.

The Taiwan-based manufacturing giant Walsin Lihwa will invest €40 million in Solarion, gaining a 49 per cent equity share of the company in return. The project will also receive a grant of €20 million from the Development Bank of Saxony, and a much larger facility with an annual production capacity of 180 MW is also planned.

Solarion’s approach to solar technology has been to develop lightweight thin-film CIGS cells on a flexible polyimide carrier material. Founded as long ago as 2000 after spinning off from the Leibniz Institute for Surface Modification, it claims to have been the first in Europe to establish a pilot manufacturing line for making these types of cell just two years later. Its flexible cells are suited to building-integrated photovoltaics (BIPV) applications, with Solarion claiming an average conversion efficiency of 10 per cent.

In late 2006, the company attracted a second round of financing following development efforts with the European Space Agency, and after completing a roll-to-roll pilot production line in 2008 it closed a further financing round, before launching its first modules at the InterSolar fair in Munich last year.

Low-cost process
Solarion’s technology incorporates a low-temperature process based on ion-beam deposition of the CIGS absorber. CEO Karsten Otte indicates that the primary advantage of this and the roll-to-roll approach is to significantly reduce the cost of photovoltaic power generation, a point echoed by Walsin Lihwa’s chairman Yu-Lon Chiao:

“The CIGS technology has the highest efficiency potential in the photovoltaic thin-film area,” Chiao said. “Together with the favorable cost structure of Solarion’s processes, we will obtain a leadership position in the photovoltaics market.”

While news of the investment is undoubtedly welcome for the company, and a sign to CIGS developers in general that there is still room for investment in the technology, Solarion will face plenty of competition in this crowded part of the solar market.

Industry analysts at Lux Research have predicted tough times ahead for all but the best-funded and most advanced of CIGS cell developers, and anticipate a major shake-out among CIGS module suppliers in particular. “Formerly vaunted CIGS developers like Nanosolar, Heliovolt, and possibly Odersun and Sulfurcell, will close their doors forever after investors refuse to throw good money after bad,” said Lux analyst Jason Eckstein just a few weeks ago. 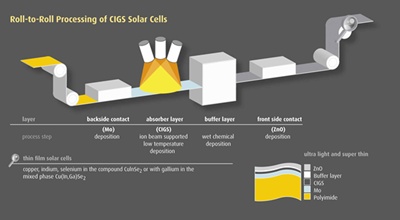 At the dominant end of the CIGS spectrum, Solibro and Miasolé have already been able to push down module manufacturing costs significantly, and are moving into a position where they can challenge crystalline silicon modules in small-scale, rooftop applications. Along with Solar Frontier, they have demonstrated that it ought to be possible to approach a manufacturing cost of $1/W with CIGS – highlighting the kind of benchmark figure that Solarion will likely be competing with.

One major factor in its favor will be the scale and manufacturing experience of its new partner. Walsin is largely known for producing steel pipes and tubes, but in recent years has diversified into more high-technology applications involving optics. Since 2007 it has been investing in high-brightness LED production, purchasing specialist equipment to produce LED epiwafers in 2008. And the company also runs an 8-inch MEMS wafer foundry incorporating image sensing and micro-mirror capability.