Movie-goers debating the merits of recent 3D efforts may have felt left in the dark - not by the plots, but by the dimness of the on-screen images. The competing optical technologies bringing 3D projection to the multiplex include systems from RealD and MasterImage, which split the image into their polarized components; and Dolby 3D, which slices the spectrum into two sets of primary wavelengths. The drawback is that, with either approach, the perceived brightness of the image takes a substantial hit.

The need to alternate between images at a rate of 24 Hz in a projected movie, as well as the natural decay in brightness from a xenon projector lamp during its working lifetime, merely adds to the brightness problem. An audience could be left experiencing just 25 per cent of the normal specified brightness, perhaps less.

Replacing bulb-driven projectors with digital systems capable of producing a much higher brightness could be the answer, and also fit neatly with the drive towards digital projection and delivery systems. Laser Light Engines (LLE), which is based in New Hampshire, has just received a vote of confidence from investors who share that view, in the form of $13 million Series B venture finance including big-screen pioneer IMAX.

"Xenon lamps have reached their practical limit for high-brightness applications," said Bill Beck, a co-founder of LLE. "High-lumen projection tops out at about 30,000 lumens with an 8 kW power supply. Most of the size, weight and power consumption of these projectors is driven by the illumination system and supporting optics, which is why they are very big."

Laser alternative
LLE's alternative is a light engine producing red, green and blue primaries from the same laser source, with the output coupled to a digital projector using optical fiber. With virtually all the laser power successfully reaching the projector chips, the result is a system that can deliver two- to five-times the brightness level of a xenon lamp.

"Our design is a diode-pumped, solid-state laser system using very mature, low-cost GaAs pump diode bars, MOPA architecture, and non-linear optics for wavelength conversion," commented Beck. "It satisfies all the key requirements: power for 3D brightness, a long lifetime, and high wall-plug efficiency for decreased operating costs. The beam also has a low etendue, which is beneficial for fiber delivery and for scaling the power to higher levels."

The company says that it can scale up the power of its system by aggregating the output from several light engines. "Our strategy is to provide RGB engines in increments of 30,000 white balanced lumens," said Beck. "These will initially be aggregated, so as to supply projectors with input powers of up to 60-90,000 lm. In terms of watts, these modules would output 75-90 watts of RGB." The company envisages these multiple RGB engines being delivered to a digital projector by optical fiber, potentially 50 feet away, allowing "a very small box to become a very bright box."

Speckle secret
LLE also says it has cracked one of the field's particular headaches: green speckle. When a highly coherent light source is used for projection displays, viewers can sometimes perceive an interference pattern as an image artifact, although the severity of this problem can be very subjective. It just so happens that the green channel is the hardest to acceptably ‘de-speckle’, because of the eye's high sensitivity to those wavelengths.

Beck is keeping the secret of LLE's victory over green speckle to himself, but admits that it was not an easy fight. "Dealing with speckle was one of the key challenges, up there alongside the development of a low-cost middle-volume manufacturing platform. We have worked for three years to eliminate the speckle, and have existing and pending IP in this area. All I can tell you is that it is really, really hard and lots of people have tried."

The LLE light engine is also green in spirit, contributing to the energy savings that the cinema industry expects to make as digital projection systems become more widely adopted. LLE predicts that RGB laser illumination will reduce operating costs for movie theater owners by potentially $10,000 per screen per year, by eliminating the need to replace expensive xenon arc lamp projector bulbs and reducing electricity use by as much as 50 per cent. As Beck noted: "Our business model is very much in line with the trend to replace low-efficiency lamps with solid-state solutions, offsetting higher up-front price with lower total cost of ownership."

IMAX is one enthusiastic supporter of the move to high-brightness digital projection, and has backed LLE with both equity investment and funds for specific custom developments targeted at its particular needs. "IMAX requires a different laser projection system - a much bigger version," Beck explained. "Its particular requirements are very high image quality to extend IMAX’s image quality performance edge, ultra-high brightness to illuminate screens up to 120 feet wide with adequate brightness for 3D images, and short time-to-market." 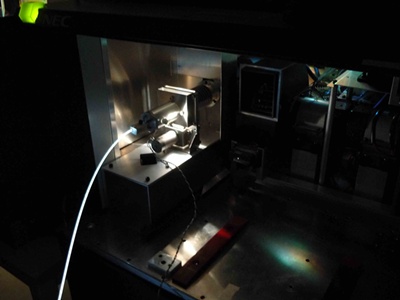 Billion-dollar market
LLE's strategy is to enter the market with light engines for IMAX, and then move into the mainstream global digital cinema sector. In parallel, it will offer its light engines to other markets with needs for high-brightness applications, such as digital signage and projection at live events.

Between them, these applications add up to a substantial opportunity. The total global market could be worth more than $1.2 billion per year, according to Beck, who notes that the base market is growing by approximately 15 per cent per year. New applications can be expected to grow at a much faster rate.

"Digital cinema provides us with a very large market that has standard requirements. This will enable us to exploit a low-cost manufacturing platform we have developed over the last two years. Once this platform is in production, it could be applied to a number of other types of high-power lasers, providing LLE with a very strong cost advantage over an even large set of applications. But first, we need to bring laser light engines to a theater near you."