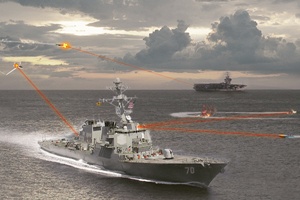 Tests carried out within the past month show that the US Navy’s Maritime Laser Demonstrator (MLD) system is now ready for an at-sea trial scheduled for late-2010.

Northrop Grumman (NG), which is leading the development of the high-power, solid-state system under a $98 million contract, said that it burned through small sections of boat material positioned on the opposite side of the Potomac River.

According to Steve Hixson, head of the NG unit that is developing directed-energy weapons including lasers, the solid-state laser has now shown comparable lethality to other laser systems at long ranges. Long-range effectiveness requires a very high-quality beam spot, to ensure that laser energy is sufficiently concentrated to burn through the target – something that is typically much easier to achieve with a gas or chemical laser than with a solid-state emitter.

But the major downside of a chemical laser is the hazardous nature of the materials required. For example, the Tactical High-Energy Laser (THEL), which was developed by TRW (now part of NG), uses deuterium fluoride as its gain medium, and relies on stores of NF3 and ethene to operate – not exactly ideal for use on a warship.

“We can defeat threats at longer ranges, using less electric power from a ship, and with a smaller, more affordable weapon,” Hixson said, indicating the advantages of the solid-state approach.

The MLD does have something in common with the THEL, however – it uses the same precision tracking system, which is said to have destroyed some 46 rockets, artillery and mortars in flight since its initial operation in June 2000. 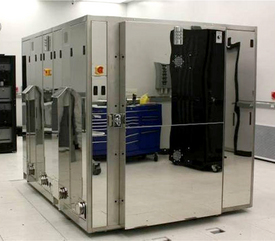 Four-year system development
The latest MLD tests over the Potomac are not just important with regard to the range of the laser weapon. Weapons systems are known to behave differently when used over water, compared with tests performed entirely on land. But the true test of the MLD will come later this year, when the system is deployed in a realistic naval environment.

According to the MLD project schedule, that first at-at-sea test will be the prelude to four full years of system development and demonstration, with up to ten laser system units expected to be evaluated during that time.

Dan Wildt, VP of directed energy systems at NG, said of the laser technology used in the MLD: “Unlike commercial lasers that form the core of some laser systems intended for use at sea, MLD’s power levels can be scaled to 100 kW and beyond to defend ships from a wider variety of threats.”

The laser system is seen as an important weapon to defend ships against so-called “asymmetric” attacks, including swarms of fast patrol boats, or suicide attacks such as the one carried out by al-Qaeda on the destroyer ship USS Cole in Yemen ten years ago.

Wildt added that the modular system architecture employed in the MLD project means that future upgrades to the overall system will be straightforward: “This allows MLD to use any laser,” he said. “Competing approaches are performance-limited by their use of gun-mounted beam directors, commercial lasers and less accurate tracking systems.”

Under the JHPSSL program, NG has demonstrated in the laboratory that it is possible to achieve 100 kW output power, by combining the beams from seven 15 kW chains based on crystal slabs, while in the field a 27 kW power was maintained for around six minutes.

However, because the electro-optical efficiency of these systems is only around 20 percent at best, huge challenges remain with regard to handling and cooling such lasers. As a result, more recent project awards, such as the Pentagon-funded Robust Electric Laser Initiative (RELI) and the Revolution in Fiber Lasers (RIFL) at DARPA are focused largely on the development of fiber laser technology to improve electo-optical efficiency to 30 percent, to reduce the heating impact.