Citing "adverse market conditions", the technology company does a sudden about-turn on plans to raise around $600M on the stock market. 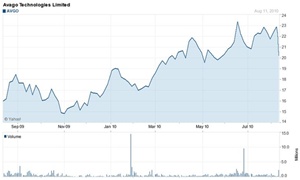 ** Updated August 16 **Avago Technologies, the former semiconductor division of Agilent and a leading producer of optoelectronic devices including LEDs, optocouplers and optical sensors, has withdrawn from a public share offering.

Having announced on August 10 that it would sell some 24.8 million ordinary shares to the public – a move that would have raised in the region of $600 million – Avago suddenly withdrew the offer just 24 hours later.

In its withdrawal statement, Avago said that it had: “agreed with its principal controlling shareholder to withdraw the proposed secondary offering to the public of 24,840,000 ordinary shares due to adverse market conditions, effective immediately”.

The day after its original announcement to offer stock for sale, Avago’s share price had dropped by 10 percent.

The withdrawal may delay any plans that Avago has to pay off a portion of its long-term debt. The company originally took on a mountain of debt when it was acquired from Agilent by private equity groups Silver Lake Partners and Kohlberg Kravis Roberts in 2005.

Following improved financial performance in recent years, in August 2009 Avago raised $650 million through an initial public offering of stock – enabling it to pay off a significant chunk of that long-term debt in late 2009.

According to its most recent financial results, posted in May 2010, Avago still has close to $300 million in long-term and other debts on its balance sheet, alongside cash and cash equivalents of $256 million.

The follow-up offering would have allowed the company to pay off its long-term debt in full, if it so wished, or given it the option of making cash acquisitions. Since the August 2010 IPO, Avago’s share price had steadily increased in value, reaching a market capitalization of close to $5 billion as the follow-up offering was announced.

Update: On August 13, Avago announced a revised secondary offering; it now plans to sell just under 15 million shares at an offer price of $20.40 per share, equivalent to just over $300 million.