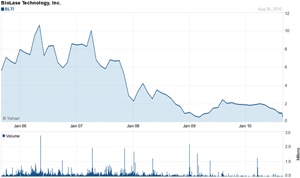 Following months of boardroom upheaval, including the resignation of five company directors, dental laser specialist Biolase has emerged with a new business strategy.

Federico Pignatelli, one of the largest shareholders in Biolase, is now acting as interim CEO after effectively ousting the previous board of directors. Pignatelli has already served as interim CEO once - for a brief period in late 2007 - after which he became Biolase president.

The company, which has an installed base of more than 7000 dental lasers, is the world’s largest provider of such equipment. Its patented Waterlase product, which is based on a combination of laser emission and water droplets, has proved popular as it provides pain-free drilling without the need for any anaesthetic. In addition, its new hand-held, wireless “iLase” product for low-power, soft-tissue applications is expected to sell in large volumes.

Nevertheless, Biolase shareholders – including Pignatelli himself - have seen their investment in the company virtually wiped out over the past five years. Shares in Biolase, which once reached close to $20 in value, have traded at below just $2 for most of the past two years, while the company recently received a warning from the Nasdaq exchange about a lack of shareholder equity.

New strategy
The new strategy instigated by Pignatelli will see Biolase sell more of its dental laser systems directly to customers, and – crucially – its relationship with dental equipment distributor Henry Schein, Inc changed from an exclusive to a non-exclusive agreement.

Pignatelli said that the price of each Waterlase system had increased from around $50,000 to around $75,000 when sold through Henry Schein, and that this increase was “clearly a factor in slowing down adoption of the systems”.

Clearly, the rest of the Biolase board of directors disagreed with Pignatelli’s strategy. “The way that the company has been managed has had to change,” the interim CEO told shareholders in a conference call to announce the restructuring efforts.

“At the last shareholder meeting there was a very big signal to change,” Pignatelli added. “[But] there was a resistance to this from the old board members.”

Following that boardroom split came a flurry of announcements that appeared to show a chaotic situation unfolding at Biolase. On June 10, Pignatelli was fired from his position as company president, only to return as vice chairman of the board of directors just three weeks later. At that point, the existing CEO David Mulder had replaced Pignatelli as the Biolase president.

Brett Scott, who had been appointed as the company’s CFO in June 2009, resigned his position shortly after the return of Pignatelli. Strangely, Scott pocketed only a fraction of the $102,500 “golden parachute” that he had agreed to when first appointed by Biolase.

Next to resign from the company’s board of directors, in late August, were Gregory Waller, James Largent and then-CEO Mulder. Like Scott before him, Mulder received only a small fraction of the $250,000 “golden parachute” that had been agreed previously.

Restoring value
Understandably, Pignatelli now wants to draw a line under the boardroom infighting, but is yet to appoint either a new CFO or CEO. While a CFO appointment could be agreed shortly, Pignatelli may remain in overall charge, saying: “I’m not going to give up this position until I find somebody who is better than me.”

Pignatelli’s key objective is to restore the previous value of the company, something that he believes is possible, given that it has a strong installed base of more than 7000 lasers. His first move is to expand the Biolase sales team, to focus on selling its own existing inventory and generate some much-needed cash.

That will be crucial, given that the company posted a net loss of $9.5 million on revenues of only $10.8 million during the first half of 2010. As of June 30, its cash balance stood at $2.9 million, following a $3 million injection of cash provided by a loan agreement signed on May 27.