As the German economy grows at a record rate, one of the country's key optics companies reports a sharp rise in orders. 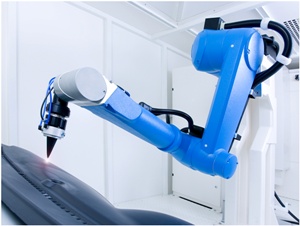 In the week that saw record quarterly growth of the unified German economy, Jenoptik said that it was set to benefit from a sharp increase in orders across each of its commercial sectors.

While the rapid German recovery has been largely attributed to an upsurge in construction in the country and a robust demand for exports, there is no doubt that the photonics industry is contributing to that growth - as evidenced by the strong results from Rofin-Sinar also posted earlier this month.

Although Jenoptik’s total revenues only increased marginally to €239.6 million for the first half of 2010 (compared with €231.3 million in the first half of 2009), sales of lasers and optical systems grew strongest of all – up more than 25 percent to €92.9 million and a reflection of the strength of the semiconductor industry right now.

Thanks largely to that semiconductor industry recovery, Jenoptik was able to swing to an after-tax profit of €3.5 million in the first half of 2010, having posted a loss of €11.1 million during the same period last year.

Jenoptik chairman Michael Mertin acknowledged that the company’s move into profitability was in part a result of cuts made during the recession, saying: “In the year just past we have made severe cutbacks and worked on our processes. With fewer employees and a slight increase in sales we are reporting another half-year result clearly in positive territory today.”

Order momentum
But perhaps the most pleasing aspect of the Jenoptik results is the growth of the company’s order book, which suggests a very strong finish to 2010. Order intake during the first half of 2010 grew nearly 40 percent on 2009 to just over €300 million.

The most significant increase in orders came from Jenoptik’s metrology business unit, which jumped 76 percent to reach €70.9 million. The key reason behind that jump has been the recovering automobile sector, which Jenoptik said was stronger than had been expected during the second quarter of 2010.

With the steep rise in orders, Jenoptik has seen enough positive evidence to increase its financial guidance for 2010 as a whole – following similar moves by virtually all of the major optics and laser companies recently.

“We are seeing a continuing and sharp recovery in the semiconductor industry and a faster pick-up in demand from the automotive industry than we had originally anticipated,” said Mertin, who is now predicting full-year sales of €500 million – rather than the previous range of between €475 million and €500 million.

“Increases in sales are expected in the Lasers & Optical Systems segment as the result of the continuing high demand from the semiconductor industry and medical technology,” he concluded.