Among the latest awards from the US Department of Defense is a $77.7 million procurement of laser transmitters from Northrop Grumman. 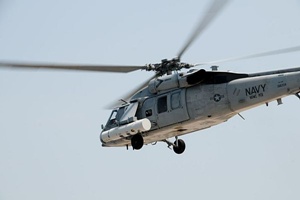 Recent contract awards by the US military for projects or systems incorporating photonics technologies included the following announcements:

August 11: Lockheed Martin Corp., Eagan, Minn., was awarded a $7,978,075 contract which will design and develop highly integrated photonic devices for transition into current emerging tactical platforms for the Air Force and will develop key technology to overcome several of the existing constraints with respect to integration and packaging, by defining the technology path to a realizable system using an optimum combination of optical devices in a chip. At this time, $2,000,000 has been obligated. AFRL/RIKD, Rome, N.Y., is the contracting activity (FA8750-10-C-0133).

August 10: Northrop Grumman Systems Corp., Rolling Meadows, Ill., is being awarded an contract with an estimated value of $77,655,380 for the procurement of 121 AN/AAQ-24(V) 25 Guardian laser transmitter assemblies for installation on CH-53D, CH-53E, and CH-46E helicopters, including associated technical data.

The guardian laser transmitter assembly, a component of the large aircraft infrared countermeasures, is a next-generation directable laser-based countermeasures system for protecting helicopters and some fixed-wing aircraft from man-portable air defense systems. Work will largely be performed in Rolling Meadows, Illinois, although a significant proportion will also take place in Edinburgh, UK. The contract is expected to be completed in August 2012. This contract was not competitively procured. The Naval Air Systems Command, Patuxent River Md., is the contracting activity (N00019-10-C-0080).

August 10: Raytheon Co., Marlborough, Mass., was awarded a $9,185,971 contract modification which will provide research to develop a modular high-power laser beam controller that efficiently projects a high-quality beam on a distant target in the presence of atmospheric turbulence, and does so with high electrical efficiency in a compact and lightweight form. At this time, $2,784,116 has been obligated. AFRL/PKDB, Wright Patterson Air Force Base, Ohio, is the contracting activity (FA8650-05-C-7211 P00012).