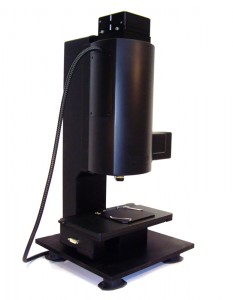 Optical biopsy techniques have been a focus of interest in biophotonics for many years. The use of spectroscopy to provide the kind of diagnosis that must normally wait for histology or cytology is an attractive proposition, potentially saving time, money and patient discomfort.

Now LLTech, a venture-stage company based in Paris, has developed a coherence tomography process called Light-CT that could present surgical staff with 3D visualizations of tissue samples in something very close to real-time.

"Light-CT technology leapfrogs all other coherence tomography approaches and product platforms in terms of laboratory, clinical and operational requirements," claims Bertrand Le Conte de Poly, CEO and co-founder of LLTech. "There is at present no device enabling real-time 3D imaging of biopsies, since current imaging techniques in pathology are destructive, two-dimensional and non-digital."

Optical coherence tomography (OCT) relies upon the interference between a reference beam and light reflected or backscattered from a tissue sample to generate structural information. "The CT principle involves using light with a relatively broad spectrum, and the broader the spectrum is, the better the sectioning ability of the technique," explained Claude Boccara, inventor of the Light-CT process and LLTech’s other co-founder. "That illumination commonly comes from a superluminescent diode or an ultrashort pulsed laser, but Light-CT is completely different."

Developed from research at ESPCI (the City of Paris Industrial Physics and Chemistry Higher Educational Institution), Light-CT employs a 150 W white halogen lamp as its beam source, providing illumination that has a very broad spectrum, but which is also incoherent. This low temporal coherence ensures that the interference needed for CT to function occurs only when the two optical paths differ by around 1 micron. And even though the intensity of light reaching the sample is only around 1 milliwatt per square millimeter, the scanner developed by LLTech can detect that interference and turn it into images with micron-resolution.

Scanning mirrors
In addition, Light-CT employs "en face" scanning: two orthogonal scanning mirrors, one to scan the object transversally and another to track down into the object, allow 3D structural information to be built up from a stack of 2D slices. These can then be viewed using a DICOM (Digital Imaging and Communication in Medicine) viewer, the industry-standard in the medical sector.

"The result is that Light-CT produces three-dimensional images with a resolution of 1 micron, and at millimeter depths in the sample" said Boccara. "This is ten times better resolution than traditional OCT provides, and at a greater scanning depth. Confocal microscopy, a competitive approach, can provide similar resolution to Light-CT but is not capable of such deep imaging and also takes longer to produce images."

Medical research laboratories are set to benefit first, and LLTech has made this $500 million research market its initial commercial target. The first Light-CT machine has recently arrived at a large pharmacological company, with LLTech preparing for regulatory approval in Europe and the US. Ultimately, Light-CT is expected to be used by researchers studying embryology, cosmetics, the brains of small animals, and the effects of drugs.

The second target market is clinical use, a substantially larger sector. A clinical study already under way at four US and European research hospitals is assessing the use of Light-CT in breast-cancer surgery and dermatology procedures. The hope is that Light-CT will allow surgeons to analyze the crucial sentinel lymph nodes and surgical margins around tumors within minutes, while dermatologists should be able to differentiate melanoma and carcinoma cells in real-time, without needing to use the scalpel at all. Patient comfort and health costs will clearly benefit. 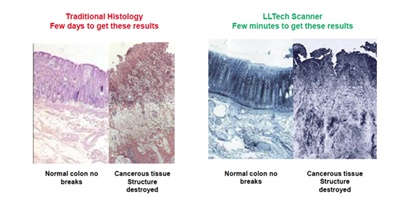 "Huge advantages"
"The ability for surgeons to see 3D visualizations of tissue samples during cancer surgeries, through real-time, non-invasive diagnosis and without needing to send them away to laboratories for processing, has huge advantages," commented Boccara.

"Today, up to 40% of women having breast cancer surgery must go through a second procedure to complete the surgery, to remove either the remaining parts of the tumor or the nodes chain," added Le Conte de Poly. "The morphological information from a Light-CT scanner could allow a distinction between normal or cancerous tissue structures to be made within minutes, during the initial surgical procedure. Then an evaluation of whether the procedure should continue or be stopped can be made."

That could add up to big business. The company believes that clinical market for Light-CT will reach $1.5 billion, with as many as 10,000 scanners eventually in use in the US alone as the technology expands from National Institutes of Health Clinical Centers and into healthcare institutions.

Direct sales to the research market will begin in the fourth quarter of 2010, with the machines appearing in hospitals from 2012. LLTech predicts that its turnover will reach $66 million by 2015.

As Le Conte de Poly noted: "The advantages of non-destructive optical biopsies are very clear to researchers and clinical staff. Some surgeons have stated that in a few years time, excisional biopsies will not be considered ethical."