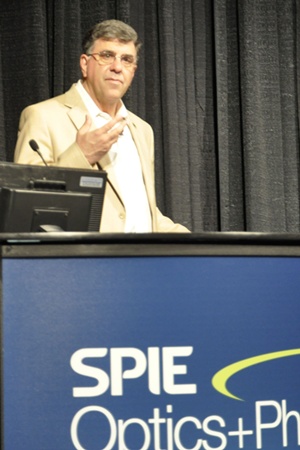 A prototype commercial laser fusion reactor could be up and running by 2020, with power stations based on the technique in place ten years later.

That’s according to Ed Moses, principal associate director at the National Ignition Facility (NIF). In an opening plenary session at SPIE’s Optics + Photonics event in San Diego this week, Moses said that “inertial confinement fusion has arrived”, and that the NIF project was “on the verge of working”.

While the scope of the NIF project does not include any commercial energy production, Moses stated that with some improvements to key optical technologies in use at NIF, a commercial version of the concept could be ready by 2030.

The NIF project is based on firing 192 ultraviolet laser beams at a small gold can in which a tiny pellet of deuterium and tritium is housed. If each of the beams strike the gold can within a sufficiently short time period, the 10 kJ of energy carried by each beam should generate enough heat and X-ray emissions to initiate a fusion reaction.

Now that this is close to being achieved, Moses says that the US Department of Energy has begun to turn its attention to the possibility of a version of NIF adapted for commercial energy production, a concept dubbed laser inertial fusion energy, or “LIFE”.

In essence, a LIFE power plant would be just like NIF, except that the pulse repetition rate of the lasers is ramped up to 10 or 15 Hz. At that rate, the heat produced could be used to drive a turbine in the conventional manner of a power station. A LIFE plant on the scale of NIF could power around a million homes, Moses believes.

If that can be achieved, the impact could be enormous. Moses suggests that a pilot LIFE plant could be ready by 2020, with the first commercial station built ten years after that. Ramping from one LIFE station per year to 18 each year from 2040 onwards, the US could become 25 percent fusion-powered by 2050, he says.

Component requirements
The key to achieving commercial production lies in the optical technologies which underpin the concept of laser inertial confinement fusion. Moses highlighted three key areas that need to improve for LIFE to become a commercial reality.

The first critical factor is the cost of the UV photons that are fired at the hydrogen target. Flashlamps are used to initiate the laser emission at NIF, but in the decade that has passed since its construction began, the output power and efficiency of laser diodes has improved enormously, with diodes largely replacing flashlamps in high-power commercial laser systems.

Today’s laser diodes are still not efficient enough for commercial fusion, but if the DOE runs with Moses’ idea for LIFE, there would likely be some major incentives for diode producers to further raise the efficiency bar. 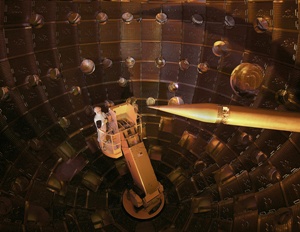 Another critical requirement will be the development of high-quality optics on the 50 cm-scale needed – an unusual size that falls in between the more typical needs of very large optics used in astronomy, and the much smaller optics used in most commercial photonics applications.

A third requirement is to come up with optical components that can withstand the bombardment of neutrons that accompanies the fusion burn, something that has already improved enormously through the development of silica optics.

None of these are trivial challenges. But with the obvious benefits in terms of clean energy production and a potentially very lucrative market for those able to solve the technical problems faced, the incentives are plain to see.

"[Developing LIFE] would require a robust, large optics industry," Moses concluded, adding that power utilities are confident that it can be done: "They believe that this industry, this community, can do this."