Reduced photovoltaic feed-in tariffs will do little to slow market growth this year or next, but a correction is possible in 2012. 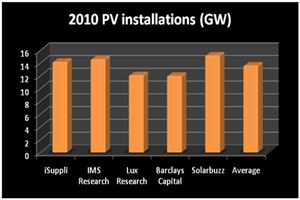 A sharp upturn in demand has seen a number of analysts re-think their appraisal of the photovoltaics market in 2010.

After the impact of the global credit crunch, which put the brakes on the rapid market expansion witnessed up until 2009, early forecasts for 2010 had been conservative at best. With the financial problems sweeping across southern Europe and reductions to feed-in tariffs (FiTs) on the way in the key German market, as well as Italy and Ontario, only a muted recovery might have been anticipated.

That view has clearly changed. And although the various analysts’ predictions for 2010 remain varied, they converge on one key point: this year will see a massive increase in installations from 2009, regardless of the long-term impact of changes to feed-in tariffs.

The European Photonics Industry Consortium (EPIC) is the latest to have come up with a figure for 2009 – citing an installed PV generating capacity of 7.3 GW. This is in good agreement with other reports, and suggests that total installed peak PV capacity stood at 22 GW globally by the end of last year.

With many other analysts updating their forecasts for 2010 recently, averaged predictions points towards installations totalling around 14&nbsGW, doubling year-on-year.

iSuppli recently updated its forecast for 2010 to 14.2 GW, while IMS Research has suggested 14.6 GW, Solarbuzz 15.2 GW and Barclays Capital 12 GW. Lux Research, which had previously suggested installations of around 9 GW in 2010, has now increased its prediction to 12.1 GW.

While something of a consensus has emerged for 2010, the impact of the impending changes to FiT rates in various of the large markets does result in a difference of opinion. According to Stefan deHaan at iSuppli, the FiT rate changes do not represent any great shock:

“In Italy we didn't expect cuts to be much higher than 20%, and - depending on the segment - they're now between 10% and 27%,” deHaan told optics.org. “The crucial thing - and we're the only ones in the industry who are saying this – is that only moderate system price drops of around 10% are required to guarantee stable investment conditions.”

Citing a 10% annual price drop as being consistent with the typical industry roadmap, deHaan believes that the supply chain will achieve that. “Return on investment in Germany (in particular for private roofs with self-consumption) will still be of the order of 8-10%, and in Italy it will be even higher, depending on the segment.” 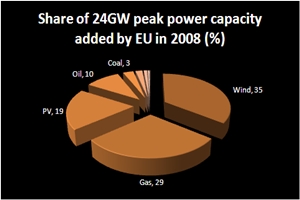 The result, says deHaan, will be continued strong growth in both Germany and Italy through 2011, with market growth to 9.5 GW in Germany and 2.0 GW in Italy as the global market climbs to 20.2 GW next year – a 42% increase on 2009. Although less bullish, Lux’s senior PV analyst Ted Sullivan also sees a strong increase in 2011 to an expected 16.8 GW, “on the back of an uptick in demand from Germany, Italy and China.”

Sullivan explains that the FiT revisions in Germany and Italy were expected, and communicated by the government well ahead of time -- causing a rush of demand in the first half of 2010. “This rush of demand is typical and usually results in slowed demand following the subsidy step-down,” he added. “Although it is looking like another announced subsidy cut in Germany at the end of 2010 is preventing this to some degree -- and cell prices are even reported to be rising slightly.”

Only after 2011 do things start to look more difficult, concludes iSuppli’s deHaan: “The correction will come in 2012 - when the German market will shrink and global markets will flatten.”