Continued strength in microelectronics, life science and industrial markets points to full-year sales in the region of $465 million.

Laser, optics and precision positioning system vendor Newport is now expecting its full-year 2010 sales to grow 25 percent from 2009, as each of its key markets continues to strengthen.

During the US company’s second-quarter earnings call, CEO Robert Phillippy told investors that following a 56 percent year-on-year increase in orders, 2010 sales should reach between $460 million and $470 million. The 2009 figure was $367 million, while Newport had previously forecast a sales increase of up to 20 percent for 2010.

The most significant factor driving the turnaround is the surge of activity in the microelectronics sector, in particular semiconductor production. Orders for this segment within Newport reached $43.4 million in the second quarter, sustaining a huge spike seen in the opening quarter of 2010 and up nearly three-fold on the second quarter of 2009.

Newport’s life and health sciences sector is also set to boom, with orders up 27 percent on the equivalent period in 2009 to $26.4 million. In this market, Newport has received recent production orders for multi-photon applications including its Mai-Tai ultrafast laser, as some long-term collaborations come to fruition.

Phillippy described the industrial manufacturing segment as “particularly encouraging”, and indicative of the wider health of the photonics industry. In this sector, orders rose to $19.4 million, up very strongly from just $11.3 million a year ago.

Improved bottom line
Overall, Newport posted sales of $114.6 million in the second quarter, up from $87.5 million last year and from $107.2 million in the opening quarter of 2010.

The improved top-line performance, combined with a significant reduction in costs thanks to the sale of its laser diode business to Oclaro in July 2009, contributed to an operating profit of $11.2 million in the quarter and $18.8 million cash generation. In the second quarter of 2009, Newport had posted an operating loss of $9.1 million.

The much-improved bottom-line performance over the first half of 2010, as well as the $4 million sale of its Hilger Crystals business during the quarter, means that Newport now has liquid assets of $152.4 million listed on its balance sheet – its highest level since 2007. 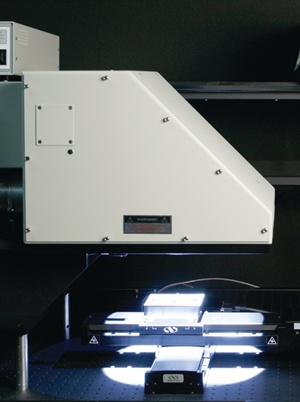 Enthusing on the performance of the company’s New Focus subsidiary, acquired as part of the deal to sell the laser diode business, Phillippy hinted that the healthy balance sheet might be used to fund further expansion. “We continue to look at acquisitions,” said the CEO.

Another option that the company may be considering is the retirement of its long-term debt. Newport owes $120 million that is due for repayment February 2012.

With robust market conditions expected to prevail for the foreseeable future, in particular from the booming microelectronics sector, the overall picture for Newport now looks very healthy for the remainder of 2010 and early 2011.

The only slightly negative outlook may surround the scientific research market, where recent capital spending has been substantially boosted by the American Recovery and Reinvestment Act. This source of funding is set to wind down from the end of this year, and the slowdown may be added to by the general cutbacks in central government spending in some of the world’s major economies.

However, Phillippy remains upbeat on that score as well, noting no direct impact on Newport yet felt from the fiscal tightening programs in countries such as Greece, and suggesting that the desire to protect investment in high-tech research from the cutback programs in many countries would similarly protect Newport sales.